'Virgen' coronation rites to be low-key 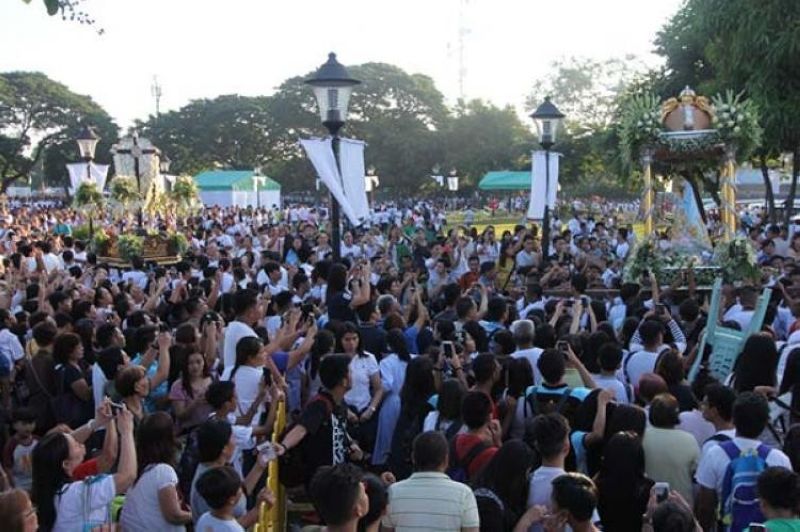 PAMPANGA. In this September 8, 2019 file photo, Kapampangans show their devotion to the Virgen De Los Remedios, with stronger faith expected amid the Covid-19 pandemic. (Chris Navarro)

IT WILL be a simple and austere celebration of the 64th anniversary of the re-enactment of the canonical coronation of the image of the Virgen Delos Remedios (VDLR) this year due to the looming threat of the coronavirus disease (Covid-19).

There will be no large public re-enactment of the canonical coronation this year, as the Archdiocese of San Fernando issued an August 11 Circular Letter 51 opting for simpler rites in light of the ongoing pandemic. The circular was signed by San Fernando Archbishop Florentino Lavarias.

The coronation rites were usually observed each year with pomp in a grand gathering of the Kapampangan faithful usually in a designated open area in the City of San Fernando. The coronation rites have been returned in recent years to the Capitol Grounds, the site of the original coronation. But this year, no grand coronation rites will be observed to prevent the possible spread of the coronavirus.

Lavarias, in his circular, said novena masses in all parishes will be held from August 30 to September 7. The archdiocese will also gather lamak, "which will be distributed to the poorest members" of parishes affected by the pandemic.

The Vicariate of Saint John Marie Vianney will host the novena masses at the Repository Chapel of the Virgen Delos Remedios.

The circular added that the coronation rites will be held at the main chapel of the Mother of Good Counsel Seminary on September 8 at 4 p.m.

The Mass will be streamed live on Facebook and will be broadcast on the Archdiocesan Radio Station 91.9 Bright FM, Radio Veritas and the Radyo Maria.

Before flourishing in Pampanga, devotion to Virgen Delos Remedios began in France and popularized by St. John Matha, who prayed to the Blessed Mother in his efforts to free slaves. Then it became popular in Spain, where she became the patroness of different crusades against Muslims. With time, her title changed by the places where she is enshrined, as the Nuestra Señora de Caridad in Cuba.

Through the galleon trades, the devotion was brought to Manila, where the oldest Marian image of the Nuestra Señora delos Remedios is enshrined at Malate Church. At present, there are 17 churches listed in the Philippines dedicated to Nuestra Señora de los Remedios.

The most popular devotion is Pampanga's Crusade of Charity and Penance, which was entrusted under the patronage of Virgen de los Remedios and initiated by Bishop Cesar Maria Guerrero, who incidentally is from Malate.

With the devastation of World War II, Pampanga became a center for communism and breeding ground of socialism. There was a huge gap between rich and poor, thus peasants and farmers were up in arms against their landowners.

Thus in 1952, Bishop Guerrero set the image of Nuestra Señora de los Remedios to visit every church and chapel around the diocese that brought together the faithful in prayer with non-stop recitation of the rosary. There were daily Masses and the faithful were encouraged to return to the sacraments. Likewise, care for the poor was emphasized where aid was solicited by the host parish and brought to the needy of the next parish. In between prayers and devotions, folks were working and sharing together for peace.

As recognition of Kapampangan's enthusiastic and deep devotion to Mary, Pope Pius XII bestowed the Canonical Crown on September 8, 1956.