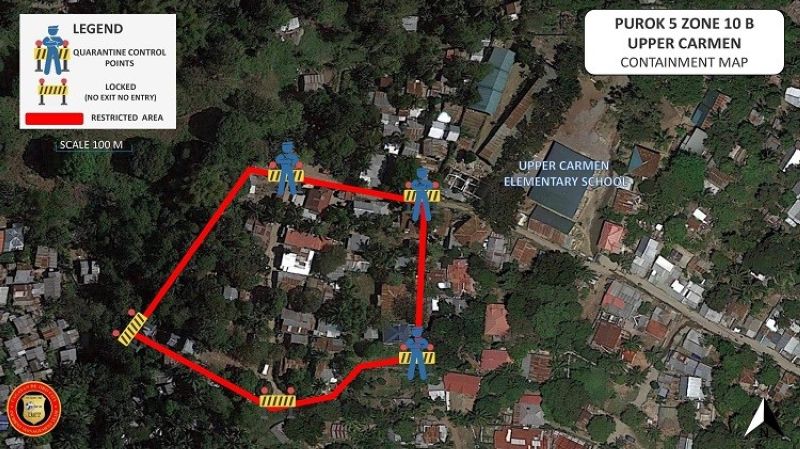 CAGAYAN DE ORO. Purok 5, Zone 10 B, Upper Carmen was placed under localized containment following the death of a 73-year-old Covid-positive woman who resided in the said area. (Photo by the City Information Office)

A 73-YEAR-OLD female from Upper Carmen, Cagayan de Oro City, who was one of the three new confirmed coronavirus disease (Covid-19) cases in the city, died past noon on August 11, 2020.

City Health Office Epidemiologist Dr. Joselito Retuya said the woman is the eighth Covid-19 death in the city and the fourth recorded death in Barangay Carmen.

Retuya said the woman, who has a home address in a municipality in Bukidnon, traveled to the said place in March together with her two grandchildren. She went back to Cagayan de Oro in July.

On August 9, the woman complained of a fever and on August 10 she had a cough. She was brought to the JR Borja General Hospital early morning of August 11 after she experienced difficulty in breathing. She was swabbed and the result came out positive around 1 p.m. on the same day.

However, past noon, the woman died.

Retuya said the woman's remains were cremated around 2 p.m. on August 11.

The City Health Office identified 13 close contacts of the woman, five of whom are her direct family contacts and eight are personnel of JR Borja General Hospital. All of them are currently in the city isolation unit.

Purok 5, Zone 10 B, Upper Carmen was placed under localized containment.