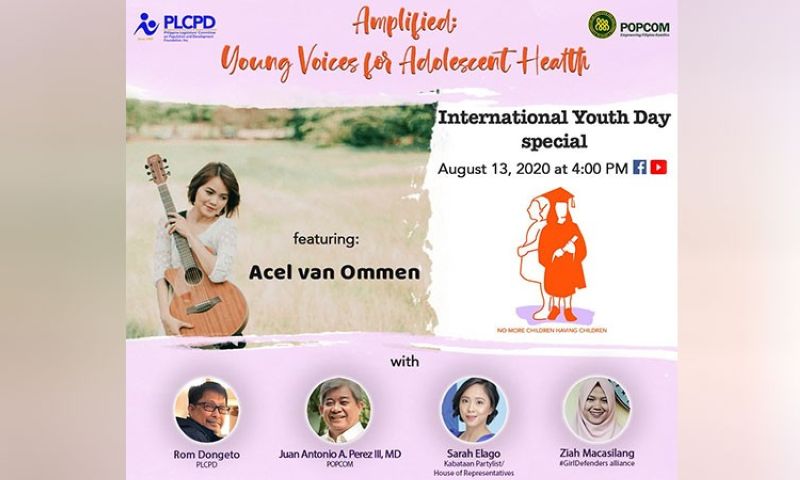 ABOUT one in 10 Filipinas 15 to 19 years old have already given birth, as this age group continues to register increasing fertility rates, the lowest usage of contraceptives, and is burdened with serious, unfulfilled requirements for family planning (FP).

Both organizations are actively campaigning to raise public awareness on the adverse impacts of teen pregnancies, especially at this time of the pandemic in relation to sexual and reproductive health and rights, while calling on legislators and policymakers to effect decisive actions to address the issue.

Civil registry data from the Philippine Statistics Authority (PSA) shows that there are teenagers who have begun childbearing as early as 10 years old from all areas of the country. Data from NDHS also reveal that the age bracket of 15-to-19-year-old girls continues to register an increase in fertility rate, the lowest contraceptive prevalence rate, and the highest unmet need for family planning. The Philippine Statistics Authority likewise showed an average of 200,000 female teens having become first-time mothers in the last five years.

According to Popcom and PLCPD, adolescent pregnancy is among the most serious sexual and reproductive health and rights, public health, and development concerns faced by young Filipinos and the entire Filipino society at present.

"For us in Popcom and the National Economic and Development Authority, teenage pregnancy still plagues the nation as a social emergency," said Undersecretary Juan Antonio Perez III, MD, MPH. "Being in the midst of a pandemic complicates and worsens the problem, as there are unreported incidents of rape and incest. For instance, Popcom Region 9 posted about 628 cases of teen pregnancy from April to June this year."

Aside from those whose families come from lower socioeconomic income brackets, the Popcom chief also noted that cases come from within groups of out-of-school youth or youngsters lacking in education, and those with limited or no access to services in sexuality and reproductive health.

Perez said Popcom continues to support the institutionalization of Comprehensive Sexuality Education in school curricula, as well as the establishment of Information and Service Delivery Network within communities to address increasing teen pregnancy through education and health services.

They serve as links to information and service requirements within youth circles, while reaching out to them and their parents regarding sexuality education.

In terms of legislation preventing the rise of adolescent pregnancy cases, PLCPD Executive Director Romeo Dongeto believes that Republic Act 10354, or the Responsible Parenthood and Reproductive Health Law, could be further strengthened with the passage of complementary bills.

He said there are provisions in the said law that bar minors from availing themselves of FP services without parental consent, even when the minor is already a parent. There are also legal, as well as social obstacles on obtaining critical information and services, making this age group highly susceptible to complications and consequences from unprotected sex, risky sexual behaviors and sexual as well as gender-based violence.

"We need to make the public understand that adolescent pregnancy is not only a result of children's consensual sexual activity," Dongeto stated. "That is why we are pushing for new laws that will address other serious concerns of adolescents, such as violent experiences like rape and incest."

Currently, the PLCPD head shared that they have initiated a partnership with #GirlDefenders alliance to create spaces for ending violence against women and girls. Its flagship campaign also endeavors to put an end to the practice of child marriage.

To generate further awareness and interest in the campaign "#NoMoreChildrenHavingChildren" addressing teenage pregnancies, Popcom and PLCPD will hold a series of online mini-concerts called "Amplified: Young Voices for Adolescent Health" to be streamed live in the Facebook pages @OfficialPOPCOM and @PLCPD1989. This will be aired every Thursday at 4 p.m. until September 3, 2020.

For the first episode, Popcom and PLCPD will organize an International Youth Day Special today, August 13 at 4 p.m. A panel interview will be staged to be led by Perez, Dongeto, Kabataan Party List Representative Sarah Jane I. Elago and #GirlDefender Youth Advocate Ziah Macasilang.

Acel-Bisa Van Ommen, formerly of the band Moonstar 88, will be the featured artist for the first mini-concert. Musical acts Cheats, Better Days and Rice Lucido will lend their voices and unique sound in the succeeding Thursdays until September 3. (PR)