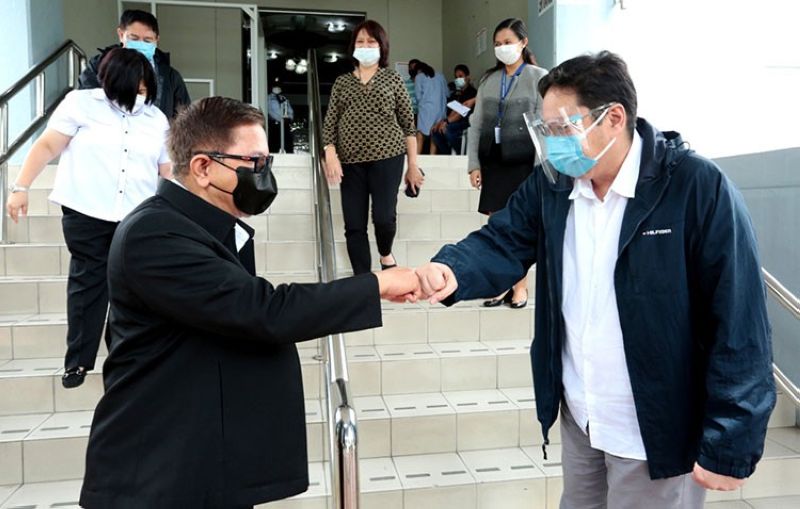 THE Clark Development Corporation (CDC) has agreed to facilitate the transfer of 43 contracts of its locators within the Clark Civil Aviation Complex to its sister firm, the Clark International Airport Corporation (Ciac).

Ciac president Aaron Aquino, who recently met with CDC President Noel Manankil, disclosed this, saying: "We had a meeting with CDC president Noel Manankil on August 11 and he is willing to facilitate and to begin the process to transfer to CIAC the 43 existing contracts originally under CDC's authority which involves both aviation and non-aviation-related locators."

For his part, Manankil said CDC has been very cooperative with Ciac and both agencies belong to one family in Clark.

CDC and Ciac are both subsidiaries of the Bases Conversion and Development Authority under the Office of the President.

CDC manages the Clark Freeport, while Ciac is in-charged with developing the 2,367-hectare civil aviation complex in Clark.

By virtue of Executive Order 716 issued in 2008, Ciac is mandated to operate and manage the aviation complex consisting of 2,200 hectares and approximately 166.9 hectares within the Industrial Estate 5 Area.

The same EO also states that all business and lease arrangements related to aviation, aviation-related services, and aviation-related logistics activities shall be solely undertaken by Ciac.

In his letter to Ciac dated July 27, 2020, Manankil cited Section 10 of the Implementation Plan of EO 716 which states that all revenues from said existing contracts, leases and business arrangements within the (Clark Civil Aviation Complex), whether aviation and non-aviation-related, shall be divided on a 50 percent-50 percent basis between Ciac and CDC up to the expiration of their existing locators.

During the meeting, Manankil vowed to present the necessary amendments of the implementation plan and to seek the approval of the BCDA board of directors.

Aquino said Ciac also sees the need to amend the said implementation plan, citing a previous Department of Justice resolution in 2015 affirming the authority of Ciac to undertake all lease and business arrangements within the CCAC, whether new or existing, as well as the collection of all corresponding revenues.

The Ciac chief noted that the Office of the President (of the Philippines) itself affirmed the findings of the Justice secretary that the proper party to all contracts within the aviation complex is Ciac, and the proceeds within the complex should pertain to Ciac alone.

Once the amendments to the implementation plan are approved by BCDA, all existing lease and sub-lease agreements and business arrangements entered into by CDC but located within the aviation complex will be transferred to Ciac by way of Deed of Assignment.

"We're exceptionally grateful to the CDC leadership for their assistance and earnestly hope the transfer request will be realized so Ciac may have additional revenue," Aquino said.

With BCDA's approval, CDC will then remit to Ciac the 100 percent share of revenues generated from the said locators from March 2020 onwards, he added.

Ciac said it is expecting to collect around P6.5 million per month if the said transfer of lease agreements involving aeronautical and non-aeronautical activities will push through.

"These are added revenue needed by Ciac to further develop the remaining prime government land at the aviation complex for commercial use in the next two to three years," Aquino said.

One of the locator agreements expected to be transferred to Ciac is L&T International Group Phils., a global apparel and accessories manufacturing company, which employs more than 7,000 workers who come mostly from Central Luzon.