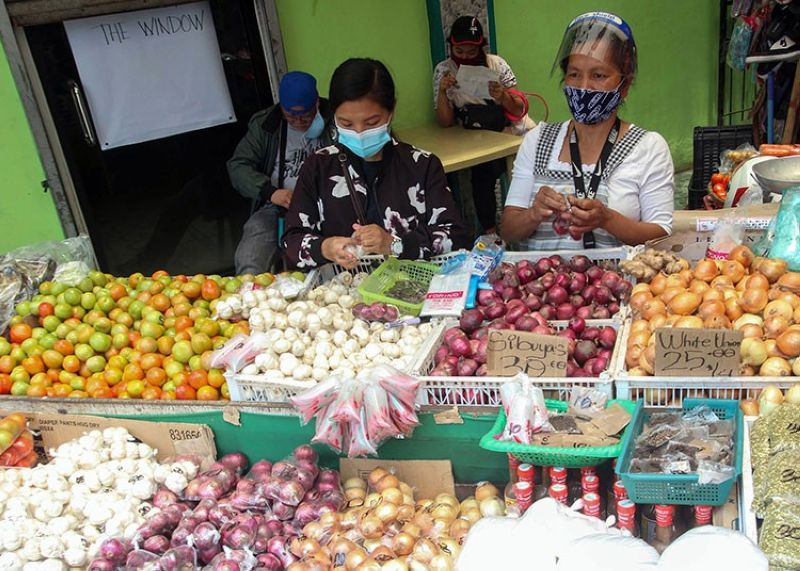 BAGUIO. Vendors at the Baguio Public market continue their business amid the threat of Covid-19. Most vendors fear losing livelihood with the looming market modernization. (Jean Nicole Cortes)

ROBINSONS Land Corporation edged out SM Prime Holdings Incorporated in its bid to get first dibs for the market redevelopment.

The decision of the P4 committee will now be forwarded to Mayor Benjamin Magalong for confirmation as the final decision falls on the city chief executive.

Dela Peña said if the decision of the P4 is confirmed by the mayor, the process of negotiation for the market starts, stressing it does not mean the OPS will spell final approval for Robinson's.

However, opposition has reached the halls of the city hall as Councilor Betty Lourdes Tabanda signified objection to any mall giant to take the reins in developing what she describes as the "heart of the city."

Tabanda, in a letter to Dela Peña on August 13, a day after the P4 committee voted in favor of Robinson's Land Corporation, said she is in favor of the redevelopment of the Baguio City Public Market.

"For years, the market has served as a vital part in the city. In fact, it has been called the heart of the city, it is part and has always been part of the lives of every resident. It is part of our heritage. It has a character of its own. A trip to Baguio is never complete without a visit to the public market. But age is catching up with the market, it needs to be revitalized, it needs to be developed," she said.

Tabanda detailed four reasons for her opposition to the any of the proponents.

Tabanda added a careful review of the proposals show that SM proposed a seven-story building with a roof deck with four floors dedicated for public market.

On the other hand, Robinsons will construct a multi-level retail floor with basement parking and a separate mix use complex for IT-BPO and mall.

"In both proposals, the construction of the public market shall be at no cost to the city. This will save the city P1.29 billion as per the Robinson's proposal and P2.13 billion as per the SM proposal. At first glance, this looks like a financial bonanza for the city. But after thorough analysis, I am not in favor of any of the proposals," Tabanda said.

The reason behind the opposition

The councilor said first, the project is supposed to be the redevelopment of the Baguio City Public Market. In the SM proposal, the two floors to house the public market will be part of the mall.

"It will be more like the supermarket floor of the mall. As a Baguio resident, we are used to saying I will go to the market. Now we will be saying I will go to the mall. What happened to our public market? The fact that the floors will be managed by the city will not change, it's the character of the being part of the mall. We will no longer have a Baguio City Pubic Market, we will be closing the heart of the Baguio," Tabanda lamented.

Tabanda said in Robinson's proposal at least, there will be a Baguio City Public market.

"But we are prepared to have a mall occupying the part of the market area? The area being requested for is not completely available. Besides, Robinsons refused to submit additional documents, hence, the proposal was not completely evaluated," she said.

A second reason cited by the councilor is on construction cost.

"As contained in the proposal of Robinson's, the cost of constructing the market is estimated to P1.29 billion, while the SM proposal at P2.23 billion. Why most of us working under the impression that the redevelopment of the market would cost P6 billion. This why we are very certain that the city could not afford it even if on a phase to phase basis. This is the reason why I chose not to vote in the City Council when we were deciding on the mode of financing. As I pointed out in one council session for which I was rebuffed, we never really discussed the financial aspect of the market redevelopment. The P6 million was the estimated figure given by the technical working committee. Now, as what can be seen in the two unsolicited proposals, the financial cost is more than P3 billion," Tabanda added.

Tabanda cited the third reason for her opposition asking it the construction of more malls in the city part of the comprehensive development plans.

"Aside from carrying capacity, has the buying capacity of the public also been considered? How about the environmental, social and cultural concerns? Will they be addressed, or even taken into consideration in the construction of additional malls," she added.

Tabanda asked the city to give locals a chance as her last compelling reason to shun the mall giants.

"Let us give our local business and residents a chance. How many locals own business in our present malls, another mall will definitely affect the existing business of our locals," Tabanda said.