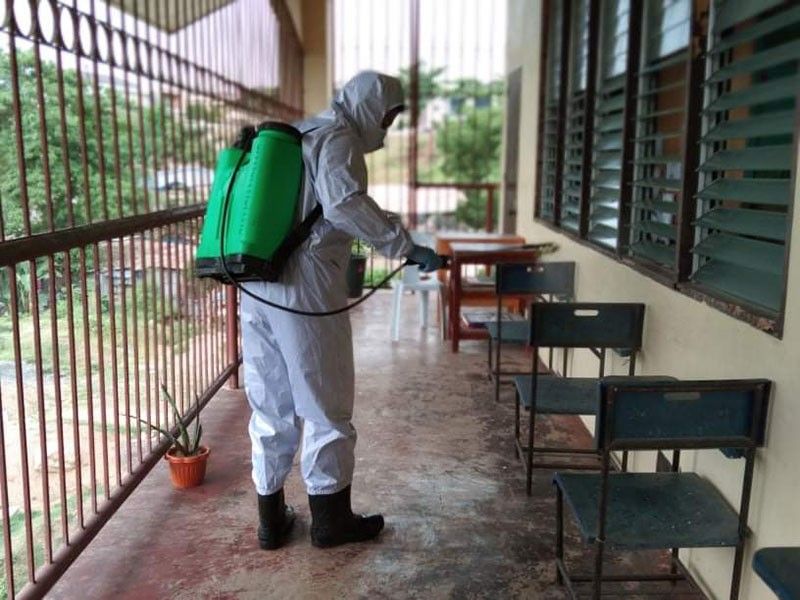 GETTING READY. An employee of the Mandaue City Disaster Risk Reduction and Management Office (MCDRRMO) disinfects part of the Casili Elementary School. Although physical classes are still suspended, Mandaue City’s decontamination team has disinfected schools that were used as isolation centers in preparation for the educational material arrangement for school year 2020-2021, which will start on Aug. 24, 2020 through the distance learning system. / CONTRIBUTED, MCDRRMO

THE Department of Education (DepEd) Mandaue City Division confirmed that around 99 percent of the schools the City used as isolation centers have been disinfected.

Last week, the Regional Inter-Agency Task Force released a memo to allow the local government unit to use the schools as isolation centers until Aug. 15, 2020.

However, DepEd Mandaue legal officer Marinel Oro said the schools are still closed since administrators are waiting for the City Health Department to issue a clearance certificate that the schools are ready to be used for educational purposes.

If the City wants to stay in the schools after Aug. 15, it will have to submit a request-letter to the DepEd 7 office, Oro said.

The quarantine facilities the City is building at the Norkis Park and at the Cebu North Bus Terminal are still under construction.

She said Mayor Jonas Cortes had expressed his interest to continue using the Mandaue City Central School in Barangay Centro after Aug. 15.

The DepEd initially gave local government units until July 30 to vacate the schools.

Nine public schools in the city were used as isolation centers with the permission of DepEd Mandaue.

On Wednesday, Aug. 12, senators urged the DepEd to postpone the scheduled opening of classes this August to October as the agency is hounded by challenges of distance education and online learning.

Sen. Francis Tolentino reminded the DepEd that it could defer the scheduled Aug. 24 school opening to a later date, citing that President Rodrigo Duterte recently signed into law a measure that allows him to move or reschedule the school opening beyond August during times of calamity.

Despite complaints from some stakeholders, the DepEd insists that most teachers, students and parents want the August school opening to push through. / KFD