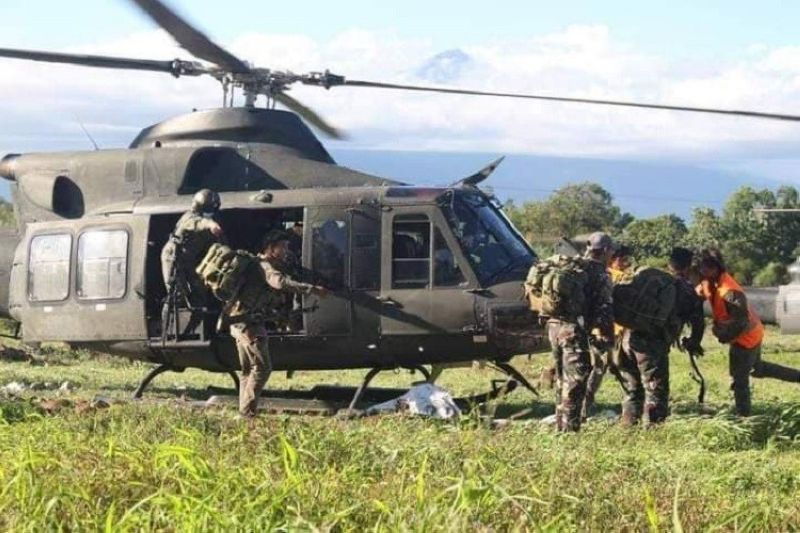 CLASH. A soldier belonging to the 62IB was slightly wounded while an unidentified member of suspected New People's Army (NPA) was killed in two simultaneous encounters between government troopers and the NPA rebels in Guihulngan City, Negros Oriental Friday, August 14, 2020. (303rd Brigade photo)

A RUNNING gun battle transpired between the troops of the 62 Infantry Battalion (IB) and suspected members of the New People's Army in Sitio Uway-uway, Barangay Quintin Remo, Moises Padilla, on August 13, 2020.

The armed encounter happened after concerned residents in the area reported the presence of armed men believed to be NPA rebels.

Residents tipped-off the 62nd IB, who has operational jurisdiction in the area, after being allegedly extorted and harassed by the NPAs.

The populace was fed-up by the extortion activities, harassment and food grabbing of the NPAs who were having trouble in their food supplies following the lockdown enforced to contain the coronavirus disease (Covid-19), the army statement said.

Despite the heavy rains in the area, troops of 62IB immediately acted on the information and launched a combat operation on the reported presence of the NPAs wherein they encountered more or less fifteen members of the NPA that resulted in a running gun battle that lasted for almost 15 minutes.

The military recovered from the scene of encounter two rice pots with cooked rice, cell phones, headlight/flashlights and other belongings.

"This clearly shows that the NPA rebels are not welcome and are despised by the people of Moises Padilla. These NPA rebels have suffered hunger and exhaustion as their emissaries encountered difficulties in finding supplies of foods and other basic needs because of the Covid-19 pandemic," Lieutenant Colonel Melvin Flores, commanding officer of the 62IB, said.

"I commend the courage of some civilians who, despite the fear and danger, managed to provide us accurate information on the area where the NPAs were gathering. The information resulted in this successful military operation," he added.

Meanwhile, Colonel Inocencio Pasaporte, 303rd Infantry Brigade Commander said that the will continue to pursue the NPA rebels without let-up to "eradicate" them in Central Negros.

"We are calling on the remaining NPA combatants to surrender and return to their families and communities to live a peaceful life. Avail the Enhanced Comprehensive Local Integration Program (E-CLIP) of the government as the Province of Negros Occidental is always ready to accept them and provide assistance to start their lives again," he said.