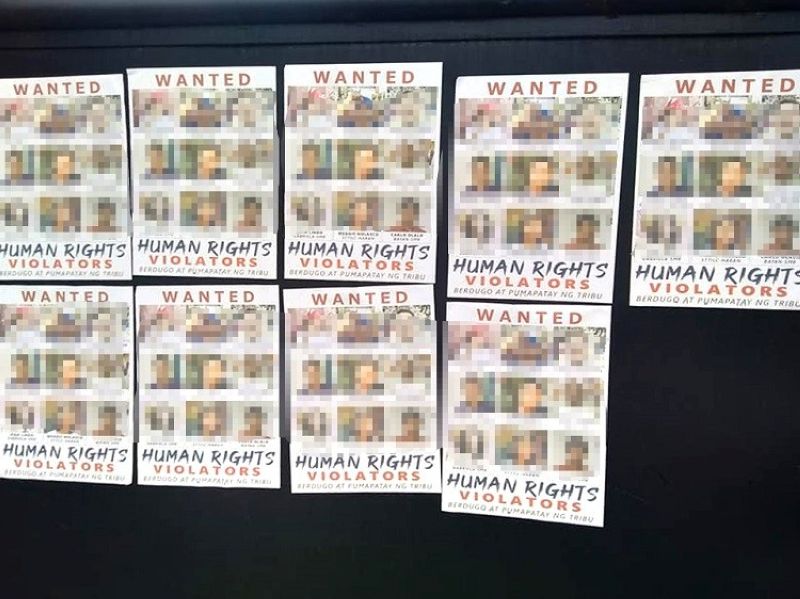 LEADERS and members of progressive groups, whose faces and names became the subject of various “vilification posters” tagging them as "terrorist recruiters" and "human rights violators," filed formal complaints before the Davao City Police Office (DCPO) and the Commission on Human Rights (CHR) to investigate and arrest individuals behind it.

Apiag told SunStar Davao in a phone interview on Wednesday, August 19, that they filed a separate police blotter to the Sta. Ana and San Pedro Police stations to investigate the incident.

Right after, he said they filed their complaints before the CHR-Davao Regional Office.

In his letter addressed to CHR chairperson Jose Luis “Chito” Gascon, Apiag said they are worried about the recent proliferation of the posters in some parts of the city, particularly on Sta. Ana Avenue, Cabaguio Avenue, Dumanlas Road and JP Laurel Avenue.

After filing, he said they went around the city to remove the posters.

In late July this year, they also cried foul over the vilification posters spreading in some parts of the Davao City, more than a week after the Anti-Terrorism Law took effect.

Some of the names included in the "second wave" of the poster proliferations were included in the previous posts. They already filed a complaint to both DCPO and CHR on July 22.

Apiag said the recent incident "has something to do with the Anti-Terror Law, which aims to silence them."

While he said it is no longer new to them, the passage of the law poses further threats to them.

"This time the posters now bear our faces and names, and the organizations we belong to. This is very alarming," Apiag said.

Apiag said that as of press time, CHR is investigating the incident.

While he said no names or groups have been initially pinpointed, they are not surprised if it is found out to be "state force-initiated."

CHR Spokesperson Jacqueline de Guia, in a Facebook post, expressed concern on the recent "terrorist-tagging" in the city.

"Such irresponsible and illegal act sends a chilling effect on the exercise of freedom of expression and opinion of these progressive individuals and organizations, and threaten their personal security and safety as well," De Guia said in a statement.

She also called on local government authorities to immediately facilitate proper investigation of the case, to hold perpetrators accountable and "to put an end to these series of intimidation against people who have openly expressed grievance against the government."

SunStar Davao reached out to DCPO Chief Kirby John Kraft for their side on the incident but has not responded as of press time.

However, in a previous interview, he already denied the involvement of police or any local security forces in the incident.

Kraft said he immediately instructed all his personnel to remove and gather those posters.

"Tayo bilang law enforcer, makakasama ito para sa atin para sirain sila. Wala kaming mapapala diyan (we, as law enforcers, have nothing to do with it. In fact, we will not benefit from it even if we get involved with it)," Kraft said, adding it is illegal to accuse anyone without sufficient evidence.

He said the incident aims to discredit the government, including its security forces, and assured that they will look into it immediately.

The police official, meanwhile, assured the public, including progressive groups, that the government will be one in safeguarding their rights to express their grievances to the government with the passage of the Anti-Terrorism Law.

SunStar Davao also reached out to some of the complainants but only Apiag responded.

Apiag said they are studying possible legal actions regarding the matter.

He added he is one of the petitioners who questioned the constitutionality of the Anti-Terror Law.

The law is currently facing 27 petitions from various groups, who are questioning some of its provisions.

The Supreme Court will be hearing oral arguments of the petitions in the third week of September.