Guards with a cause 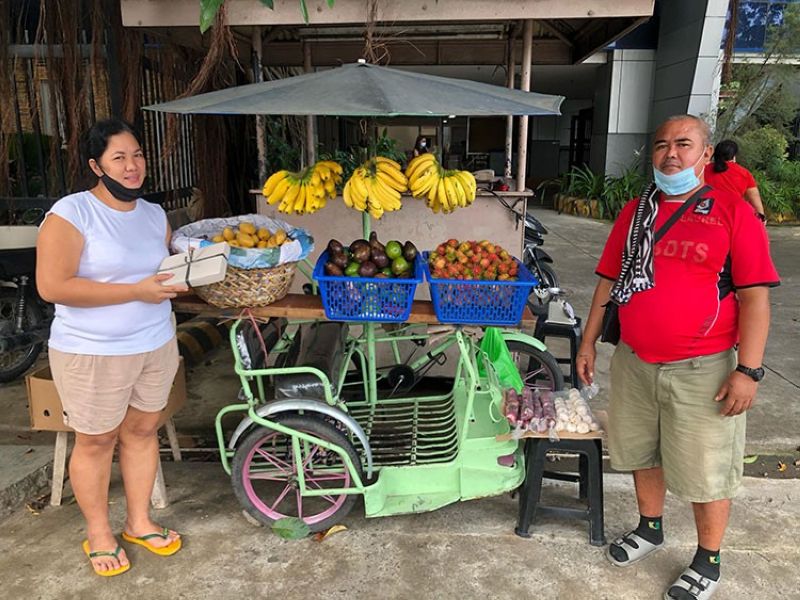 FOR THE FAMILY. Raquel Sucon (left) and Earl Lopez, security guards at Ateneo de Davao University, have started selling fruits in front of the school to provide for their respective families. (Nino Velasco, Addu intern)

Earl Lopez, a familiar face in the university, is one of many who keeps the university safe; known for his chipper attitude and a kind demeanor.

The 44-year-old father of three was seen donning a different uniform on a Wednesday morning.

Wearing casual clothes and a towel on his head, Lopez sells fruit by the campus gate alongside another colleague setting up shop there from 8 a.m. to 6 p.m. along Roxas Avenue selling fruit and other homemade snacks to compensate for the lack of work during the pandemic.

Lopez said he chose fruit because to him, it was more than just trying to cope with finances; he wants to give the people vitamins and resistance to the virus.

"Para ma-resistensya yung mga tao, kasi yun naisip ko, vitamins ba, panglaban sa Covid (So they can have resistance, I thought about it because of the vitamins, so they can fight Covid)," said Lopez.

He hopes that the Roxas night market opens soon because it will allow him to add more hours to his work time increasing his chances of making a sale.

According to Lopez, he only gets to work on campus for seven days, divided into two months. So in order for him to provide for his family, he chose to sell fruit to gain some extra income whilst rationing his few graveyard security shifts on campus for rainy days.

Lopez and his family have been greatly affected by the economic impacts of Covid-19, even his wife has been stripped of her job as a beautician in a salon. His greatest priority is providing for his family, and to put food on the table.

Alongside Lopez is Raquel Sucon, a single mother of one and also another victim of the economic decline. She has chosen to sell homemade snacks to help cope with the pandemic.

Sucon said for around half a month she is without work. She said a number of her colleagues have lost their jobs and the ones who were kept, were given fewer shifts to work, which means they are receiving less income. She only works for seven days every 15 days.

Smiling through every sale, and laughing while times are difficult, both of these people have kept their heads high. Now is the time to support one another to beat the pandemic shrouding the world.