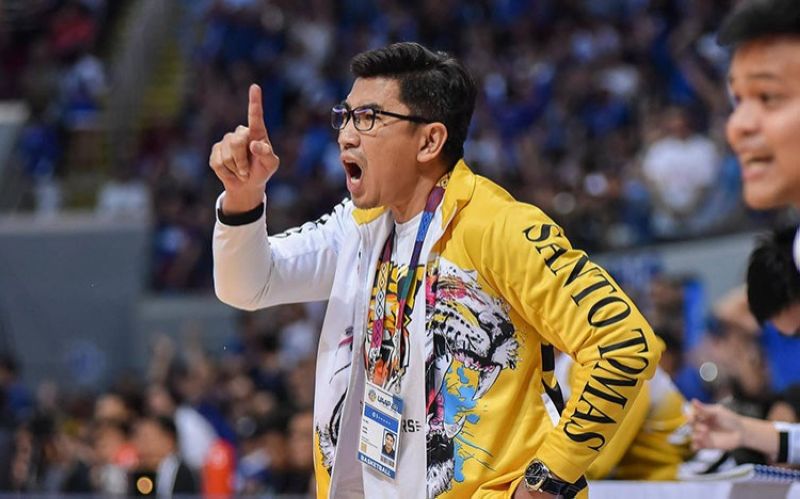 Beleaguered UST head coach Aldin Ayo has vowed to cooperate with the investigation into the alleged group training sessions of the school’s Growling Tigers basketball team that was held in Sorsogon. (The UAAP photo)

In a statement that was released on Sunday evening, Ayo said he would refrain from making any comments as UST is already looking into the matter. Nevertheless, Ayo said is “fully cooperating” with the investigation.

"I will not comment for now as UST is already investigating the matter as well as the IATF. I am fully cooperating with the ongoing investigations and praying that in due time, this will be properly addressed," read Ayo’s statement.

UST has already formed a committee to look into the matter, which government officials believe is in violation of the government’s strict health protocols.

Some of the sports or physical activities that the Inter-Agency Task Force (IATF) for the Management of Emerging Infectious Diseases has allowed in areas under modified general community quarantine (MGCQ) status include biking, golf, swimming, badminton, equestrian and skateboarding. Contact sports such as basketball and boxing remain prohibited except for the professionals.

Ayo and the rest of the UST’s men’s basketball team has been on the hot seat since news of the group training sessions surfaced on Friday, following the unexpected ouster of former team captain, CJ Cansino who claimed he was kicked off the team after he asked for permission to leave Sorsogon and visit his family in Valenzuela City for a few days.

Although it remains unclear what really led to the break-up of Cansino and UST, Ayo briefly touched on the matter in his statement.

“The circumstances of life today have brought out the marked differences between my orientation in life and the fundamental option of our player CJ Cansino. We have found that it would be best that we part ways and allow maximum growth for each other,” Ayo said in the statement.

Representatives of the UAAP, the Philippine Sports Commission, the Games and Amusement Board and the Department of Health have already met on Saturday and are set to meet again to tackle the findings of UST’s investigation on Wednesday. (JNP)