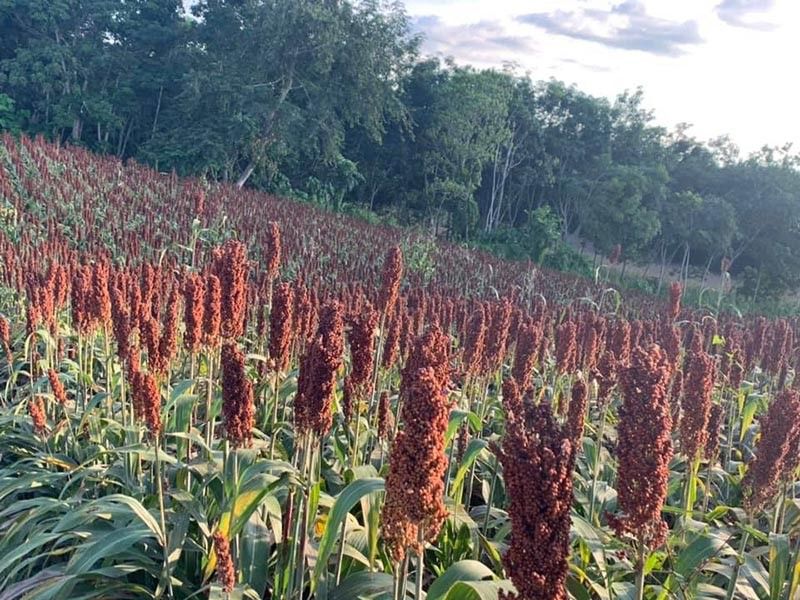 FIRST HARVEST. Mindanao Development Authority (Minda) Chairperson Secretary Emmanuel Piñol said for the first sorghum harvest, they will gather data on how much is the average grains yield and the volume of silage which could be harvested. (Photo by Mlang Vice Mayor Joselito Piñol)

FARMERS of a sorghum pilot farm in Mlang, Cotabato made their first harvest on August 24, 2020, five months after they were given seeds donated by an agribusiness firm in the United States.

"The sorghum will be harvested at 95 days old which indicates that what Scott Seeds donated was an early maturing variety," Mindanao Development Authority (Minda) chairperson Secretary Emmanuel Piñol said on a Facebook post on August 23, Sunday.

Scott Seeds Company, a Texas-based seed production company, donated some 11,200 kilograms of sorghum seeds in the first quarter of 2020. The seeds arrived at the Davao Port on February 11, 2020. The deed of donation was signed between Piñol and Coby Krieghauser, chief executive officer and owner of the Scott Seed Company, on December 16.

He added that the 1.5-hectare sorghum plantation is located in Barangay New Esperanza, Mlang, Cotabato and was supervised by Vice Mayor Lito Piñol, who provided the labor and the inputs.

Piñol said for the first harvest, they will gather data on how much is the average grains yield and the volume of silage which could be harvested.

"The Office of the Municipal Agriculturist of Mlang will be asked to join the harvest tomorrow to validate the estimate grains and silage yield," he said.

Piñol said, "sorghum is a sturdy dual-purpose grass variety from Africa which produces grains for human food and livestock feeds."

"At harvest, the stalks and leaves are still green and fresh...making it an ideal source of silage for cattle and small ruminants," he said.

Piñol added that with one planting, sorghum could be harvested up to three times because of its ratooning qualities.

"Meaning the remaining stumps after the cutting of the stalks could grow again and yield grains for two more harvests," he said.

On August 19, 2020, Minda expanded its sorghum program in Misamis Oriental after turning over 20 kilograms of sorghum seeds to Mayor Dennis Roa of Naawan. The seeds are good for 20 hectares.

"The Mindanao Development Authority (Minda) is promoting the planting of Sorghum in Mindanao as an additional feed material for the growing livestock and poultry industry of the island," Piñol said.

Piñol, in a separate post on August 24, said Scott Seeds and Minda are reaching out to the US Agency for International Development and the United States Department of Agriculture to support the Mindanao Sorghum Development Program.