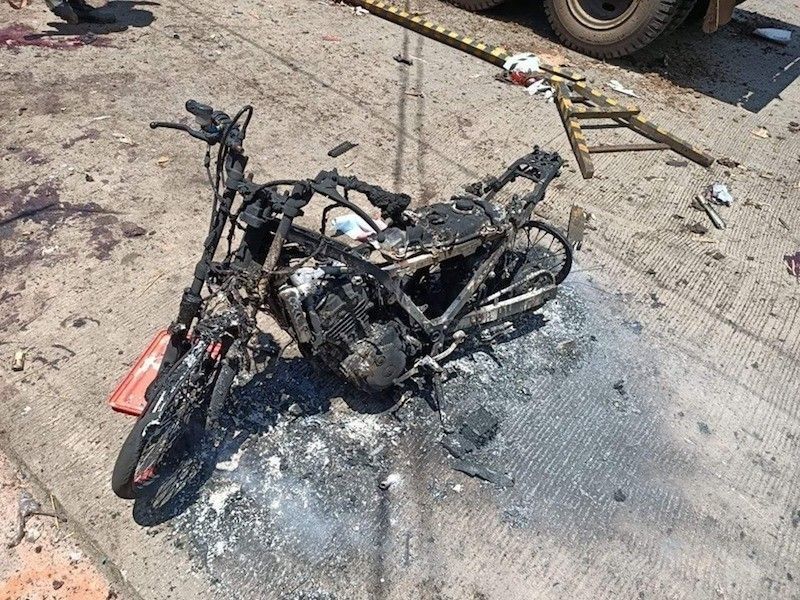 SULU. A motorcycle was found gutted at the site of the first explosion in Jolo, Sulu on August 24, 2020. Investigators initially believed the explosive was on the motorcycle, but police said the motorcycle should have been torn apart by the explosion. Police are now looking at suicide bombing, as the military had suspected. (Photo from Joint Task Force Sulu)

PHILIPPINE Army Chief Cirilito Sobejana on Wednesday, August 26, 2020, said the two suicide bombers believed to have caused the explosions in Jolo were the women being monitored by the military.

They were identified as Nanah and Inda Nay, the widows of Norman Lasuca, the first Filipino suicide bomber, and Abu Talha or Talha Jumsah, a bomb expert, respectively.

Sobejana said the Abu Sayyaf Group (ASG) most likely used the death of the husbands to motivate the wives to stage the attacks on August 24.

Police investigators are also now looking at the possibility of two suicide bombers and have dismissed the initial assumption that the first of two explosions on August 24 came from a parked motorcycle.

In response to the claim of the military that the suicide bombers were the subject of the intelligence operation conducted by the four military personnel killed at a police checkpoint in Jolo on July 29, Abu said there should be proof.

Lasuca was the first Filipino suicide bomber. Together with another suicide bomber, he attacked a temporary camp of a special army counter-terrorism unit in Indanan, Sulu on June 28, 2019.

Talha, meanwhile, was killed in an encounter with government troops in November 2019.

Sobejana earlier said the two female suicide bombers were operating under Mundi Sawadjaan, a relative of Hatib Sawadjaan and the second to the highest leader of the Abu Sayyaf Group.

Two improvised explosive devices were set off about an hour and 100 meters apart in Jolo, Sulu on Monday, August 24.

Authorities said that aside from the two suicide bombers, 15 people were killed. The fatalities were eight soldiers, one Special Action Force policeman and six civilians. Of the eight soldiers killed, seven died on the spot while one died at the hospital.

Seventy-four other soldiers, policemen and civilians were wounded, according to the Armed Forces of the Philippines Public Affairs Office. (SunStar Philippines)