Jolo stays vigilant amid report of another terrorist plot 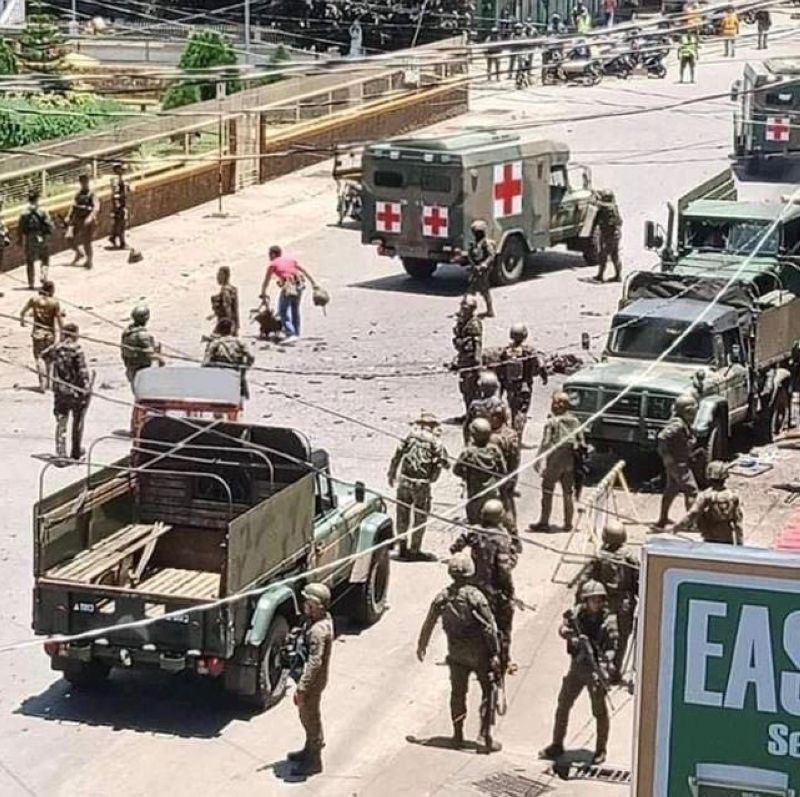 SULU. The military sweeps the sites of the two explosions on August 24 2020. (Photo from Joint Task Force Sulu)

JUST a couple of days after the twin explosions that killed 15 people and wounded 74 others, life returned to normal in Jolo, Sulu, according to Mayor Kerkhar Tan.

He said, however, that they have remained vigilant because of an intelligence information about another possible terror attack.

Tan urged the residents to watch out for suspicious people and activities in their communities.

Western Mindanao Command (Wesmincom) Chief Corleto Vinluan said they were not discounting the possibility that such an attack may happen again.

“When it comes to terrorism, there is no such thing as an impenetrable barrier so although na-foil namin ‘yung several attempts nila in the past, minsan nalulusutan din, pero it does not mean na ang kasundaluhan natin have been remiss of their job,” he said.

He said a terrorist attack was supposed to be carried out on June 26, but they foiled it.

Vinluan said they were monitoring three daughters and a son-in-law of the couple who attacked Jolo Cathedral.

“Three daughters of suicide bombers who bombed Jolo cathedral last year and one son-in-law. But we have no report yet if they are already transformed,” he said.

Vinluan said they were last monitored in the vicinity of Patikul, Sulu and were allegedly under the care of Mundi Sawadjaan.

Sawadjaan is believed to be the brains behind the latest attack in Jolo, which Gapay said was carried out by two female suicide bombers.

Vinluan said their priority now is to find Sawadjaan.

He said they were getting assistance from the United States and other countries in their efforts to locate the terrorists.

"Of course we need the support of the US and other countries in locating the whereabouts of other elements of terrorist groups here in Sulu. They are helping us," Vinluan said.

He confirmed that two female suicide bombers were involved in the August 24 attack in Jolo, but said they were still confirming their identities.

Armed Forces of the Philippines (AFP) Chief of Staff Gilbert Gapay earlier identified the suicide bombers as the widows of Norman Lasuca, the first Filipino suicide bomber, and of Abu Talha, a bomb expert who was trained by ISIS.

Vinluan said there is a big possibility that the suicide bombers were Filipinos based on the accounts of a witness.

Gapay, for his part, said they were confident that the terrorists are in Sulu because Jolo was placed on lockdown immediately after the explosion.

"Actually we have troops operating in the area and we also have some information of their hideouts and their lairs and of course our forces in Sulu are operating in those areas," Gapay said.

Meanwhile, Mayor Tan said he does not believe declaring martial law in Sulu would prevent another terrorist attack.

He noted that even while Sulu and the entire Mindanao was under martial law, suicide bombers struck at the Jolo Cathedral.

In January 2019, a foreign couple attacked Jolo Cathedral while a Mass was being held. Twenty-three people were killed, including uniformed men who were securing the cathedral, while more than 100 were wounded.