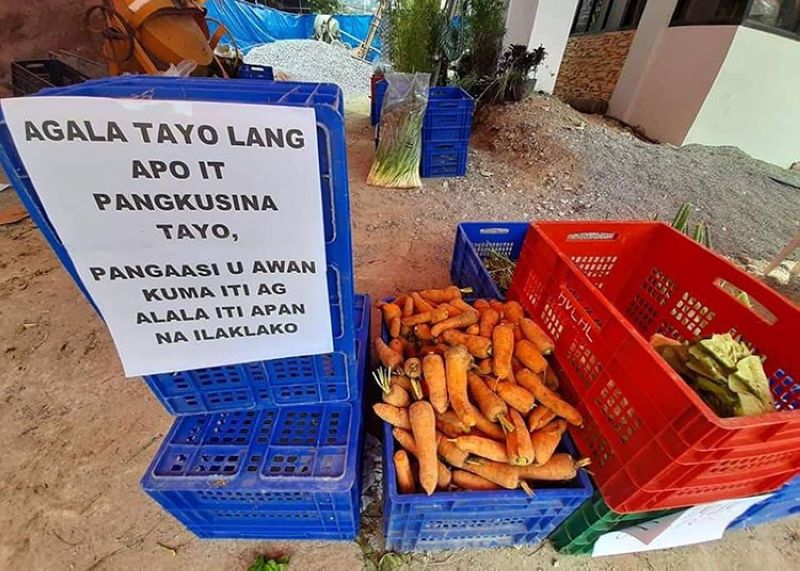 FREE HIGHLAND VEGETABLES. Vegetables donated by farmers and traders of La Trinidad Vegetable Trading Post were given to the public while some officials bought vegetables to support farmers and those in need amid the Covid-19 pandemic. (La Trinidad Mayor's Office photo)

LA TRINIDAD -- Instead of letting highland vegetables go to waste, Benguet farmers have opted to give free vegetables for five months now.

A small area at the La Trinidad Municipal Building was allotted for the Vegetable Donation Center where farmers from Benguet and Mt. Province place unsold produce.

The residents in the town were encouraged to get the vegetables for free but only for their consumption and are asked to register their name, address, and contact number in the log-book.

From April 2 to June 11, there were 326,000 kilograms were donated to different stakeholders from Baguio City and Benguet's capital town.

Ticbaen added that during the lockdown, the vegetables were distributed to residents of the 16 barangays of the town.

Farmers are at times given rice, cash, and gasoline to at least aid them for not being able to sold and earn for the day.

Mayor Romeo Salda said with the challenges of marketing vegetables, the program may not be seeing any sign of a halt soon as there are still farmers who are bringing their produce to the center.

The mayor said three trucks with vegetables usually bring produce for restaurants in Manila, but due to the unavailability of these markets, it came to a halt.

Distribution of the produce was earlier managed by the Municipal Agriculture Office.

Salda added that once the P20 million food processing facility is finished, vegetables may be brought to the the Benguet Agri-Pinoy Trading Center (BAPTC).

The facility, previously approved by Agriculture Secretary William Dar, aims to add value to the vegetables and fruits produced by thousands of farmers in Benguet and nearby provinces in the Cordillera region.

The management of BAPTC in La Trinidad was also earlier directed by DA to serve as the "buyer of last resort" for vegetables, fruits, and other agricultural produce delivered to the BAPTC by farmers in a bid to prevent wastage, and for farmers to earn.

Meanwhile, in the Municipal Council of La Trinidad is a proposed ordinance establishing support program for La Trinidad Vegetable and Cut flower farmers affected by oversupply and non-demand in times of pandemic, authored by Councilor Nestor Fongwan Jr.

La Trinidad in Benguet is home to big vegetable trading centers, the La Trinidad Vegetable Trading Post and BAPTC delivering vegetables to markets in Manila such as Divisoria and Balintawak and other areas to in the country like La Union, Ilocos, Pangasinan, Tarlac, Palawan, Cebu and Iloilo, among others.