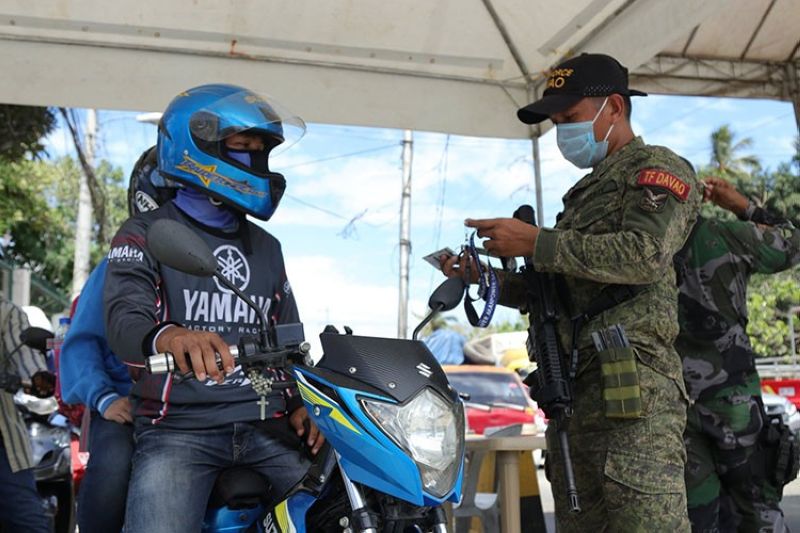 He said according to their head, Colonel Consolito Yecla, the measure was imposed considering the nationwide heightened alert following the terrorist incident that claimed the lives of eight soldiers, one Special Action Force (SAF) policeman, and six civilians.

"TF Davao implements additional security measures at all entry points in Davao City to deter or pre-empt any terrorist plan against the people of Davao," Legarde said in a text message.

According to the TF Davao order, all travelers and commuters entering the city are required to wear a face shield at all checkpoints while undergoing the mandatory security and health checks at the inspection areas.

Travelers and commuters are required to remove their face mask for 10 seconds for facial recognition and identification prior entering the thermal and baggage inspection areas.

Those without face shields will be required to proceed to the facial recognition/inspection area with transparent health protective barrier before they are allowed to remove their face masks.

Female commuters or travelers wearing scarves and robe-like dresses due to cultural or religious reasons will be checked at the inspection cubicles for facial recognition by female soldiers to ensure respect for their privacy.

Yecla previously said the security sector is struggling in ensuring the city's security since the public is mandated to wear face masks due to the current coronavirus (Covid-19) pandemic.

He mentioned before that checkpoint personnel were not mandated to require entering individuals to remove their face masks.

Davao City Mayor Sara Duterte-Carpio also said that terrorists are difficult to distinguish during the pandemic.

"Our health protocols are not compatible with our security protocols, like the wearing of face masks and face shields. These are things that make it difficult for our security to identify (the terrorists). We always check, but we don't know that it is already the one who is wearing the mask there. We cannot distinguish because before, those wearing masks are the ones who have evil plans. Now, you can no longer distinguish terrorists from a nurse," the mayor said on Tuesday, August 27, in a radio interview via 87.5 FM Davao City Disaster Radio.

Duterte-Carpio reminded Dabawenyos to stay vigilant to thwart violent extremism as the city is not "immune" to any possible terrorist activities, even if there is still the threat of Covid-19.

The mayor also asked the public's cooperation in reporting any suspected individuals or received information of possible terrorist activities to local authorities.

"We also anticipated a similar incident because of the prevailing information that there are some elements in our adjacent regions which are sympathetic to these groups [Abu Sayyaf]," Escobal said during a virtual presser.

Legarde, meanwhile, said all persons are also required to remove their jackets from the inspection areas, as part of the city's "No Jacket Policy" in public places.

Also, an updated gallery of known terrorists will be posted at the inspection areas, he said.