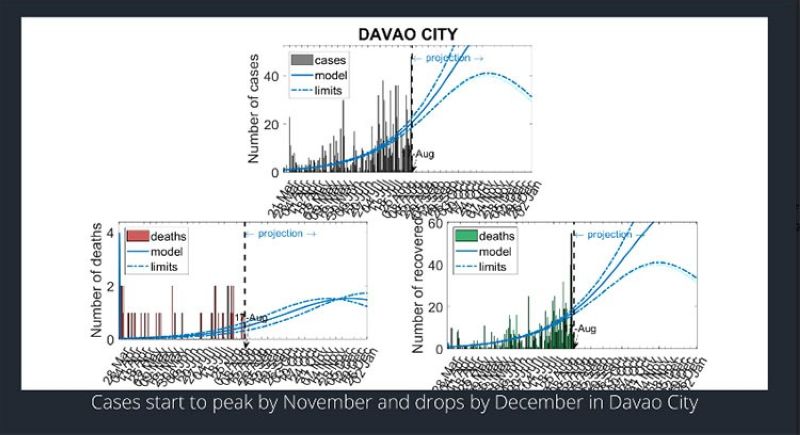 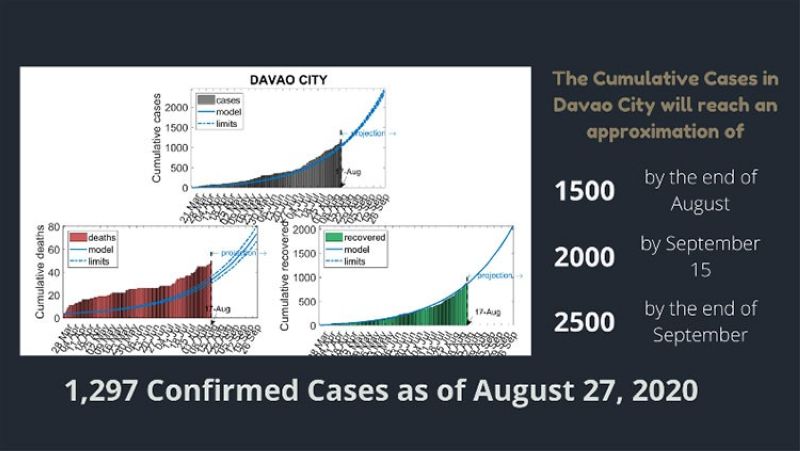 THE number of coronavirus disease (Covid-19) cases in Davao City may hit 2,500 by the end of September, according to a recent projection of the University of the Philippines-Mindanao's Interdisciplinary Applied Modeling laboratory (IAM lab).

The projection was based on the Department of Health-Davao Region data.

The team revealed in its study, titled "Projections of Covid-19 cases, deaths, recoveries in Davao City and some provinces in Davao Region," that the cumulative count of cases by end-August will be at 1,500.

As of August 27, data from DOH-Davao showed that total confirmed cases in the city are now at 1,297, while total recoveries reached 1,003 and death toll at 54.

The study also showed that the average transmission rate in Davao City is about 1.0466 per day or 10 new individuals are infected every 10 days.

"For Davao City, if we extend the model, the projection of cases will peak by November and drop by December," Dr. May Anne E. Mata, Associate Professor of Applied Mathematics, head of IAM lab, DMPCS, UP Mindanao, said in a virtual SM Lanang Connect media forum on Friday, August 28.

She also emphasized that Davao City's Covid-19 cases continue to rise and are presently not showing signs of a flattened curve.

According to the group, a more relaxed community quarantine restrictions and movement of people are one of the factors in the upward trend of the city's Covid-19 cases.

"Relax na kaayo ang tao because MGCQ na ta (People are more relaxed now because we are currently under MGCQ)," she said.

Mata also underscored that the entry of locally stranded individuals (LSIs) and returning overseas Filipinos (ROFs) contribute to the increasing cases in the city.

Mata said the projection is not to scare people but to guide the government in their measures against the further spread of the virus.

"We hope that the movement of the people will still be controlled but not in a way that it will paralyze the economy. I think the most important part is to closely monitor the LSIs and ROFs. The government should ensure that all these individuals follow the protocols and complete their quarantine procedures," she added.

For the projections in other provinces in the region, the team observed that Davao Oriental which has currently 195 cases will most likely reach a total of 320 cases by the end of September.

However, for Davao del Norte and Davao de Oro, Mata said the provinces are starting to flatten the curve. The two provinces have currently 174 and 158 cases, respectively. The UP-Min IAM lab projects Davao del Norte to reach 250 cases by the end of September while Davao de Oro is projected to record 220 cases.

"But we hope that the low cases are not due to low testing capacities in these areas," she said.

"As an overall assessment in Davao City and other provinces, it is safe to say that we have it under control compared to the National Capital Region. But let us not be complacent, and hopefully, that cases here will not surpass our projection," Mata said.

She added that they are open to working with the government to help flatten the curve.