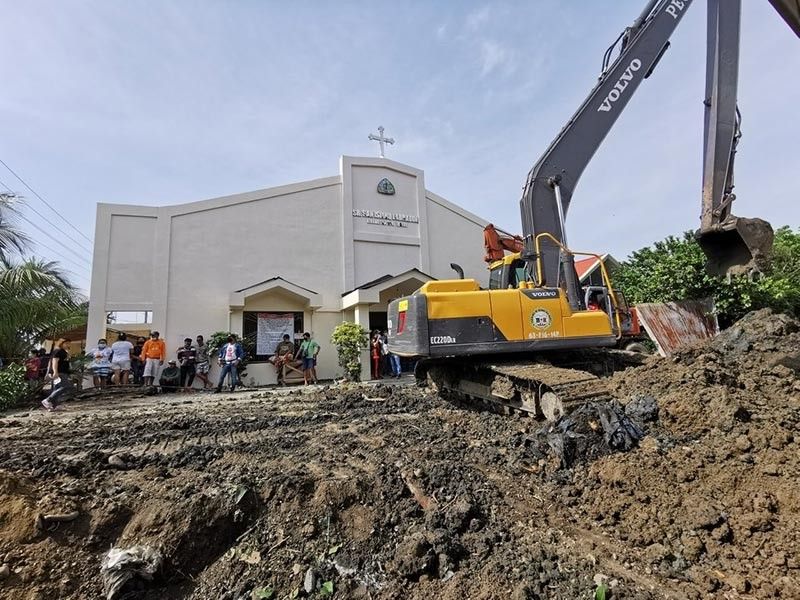 In a press release, Municipal Information Officer Mart Sambalud said that retrieval operations are ongoing with heavy equipment digging close to where the four men are believed to have been buried.

Sambalud said the rescue operation has turned into retrieval operations after rescuers failed to get signs of life from the area.

He said the four who have been buried for almost 24 hours were presumed dead as water and mud blocked the passageway of air.

The decision came after the assessment of the Incident Command System and Emergency Medical Responders who convened at 11 p.m. of Sunday, Sambalud said.

The four men, identified as Kayl Castaneres, 18 years old, Gerick Marquez, 23, Dindo Panares, 18, and Rustom Rancho, 18, were trapped under the ground after the soil softened, causing the tunnel to collapse around 10 a.m. Sunday, August 30.

Sambalud said the entrance of the tunnel remains dangerous for the rescuers, adding that the engineering team will be digging from the other area within the private property using a backhoe.

It was learned that the treasure hunters started their operation early at 9 a.m. Sunday, but it was only reported to the Santo Tomas Municipal Disaster Risk Reduction and Management Office (MDRRMO) around 1 p.m. of the same day when the situation went out of control.

Meanwhile, in a phone interview with SunStar Davao on Monday afternoon, August 31, the retrieval operation was suspended around 4 p.m. due to the ground's instability, which delayed their operation even more.

He said the heavy equipment, including two backhoes, dispatched to the site to excavate an area close to the tunnel might collapse if they would push through with the operation.

He added the entrance of the tunnel was unstable and dangerous for the rescuers to enter.

"We are still looking for the drifty area of which we believe where the four trapped individuals are at," Sambalud said.

Based on their initial investigation from accounts of the people near the area, Sambalud said the tunnel was supposed to be for a water refilling station which began last March but was halted in April after the residents complained.

The tunnel excavation, which was not granted a permit, resumed three days before the incident, he added.

The information officer clarified that the alleged treasure hunting is still inconclusive as families of the victims denied that they are involved in such activity.

Of the four victims, three are residents of Kapalong and the other one is from Sto. Tomas.

Sambalud said the parents of the victims thought their children were working for a banana plantation in the province.

"(The) parents were clueless of their involvement in this activity," he said.

Sambalud said the local government is still investigating the incident, adding they are also looking to file charges against those behind the alleged illegal activity.

The incident, he said, also serves as a warning for those people who are attempting to do either treasure hunting or gold mining, without a permit from the government.

Meanwhile, Santo Tomas Mayor Ernesto Evangelista said in a text message to SunStar Davao that the retrieval operation will resume on Tuesday, September 1.

Evangelista said they suspended the retrieval operation because they feared that the two houses nearby would also collapse due to loose soil.

He said they are mounting a temporary timbering, which would help support in their operation.