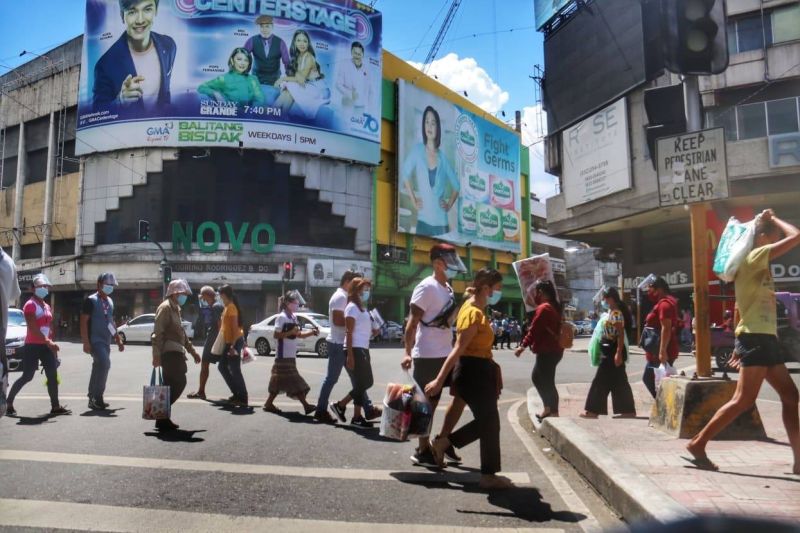 BACK IN BUSINESS. On Sept. 1, 2020, at the start of Cebu City’s modified general community quarantine (MGCQ), people from all walks of life were seen going about their lives, running errands, under the so-called “new normal.” Passersby on Colon, dubbed as the oldest street in the country, were seen observing the oldest lesson from the Covid-19 crisis: Wear your mask. (Amper Campaña)

SEVERAL businesses in Cebu that were not allowed to open during the general community quarantine (GCQ) period will now be allowed to operate.

This after the cities of Cebu, Mandaue and Lapu-Lapu and the towns of Minglanilla and Consolacion shifted to modified general community quarantine (MGCQ) on Sept. 1, 2020.

However, to prevent a resurgence of coronavirus cases, officials vowed to keep some restrictions in place such as the use of quarantine passes, the imposition of curfews, the coding scheme for public markets, and the stay-at-home order for minors and senior citizens.

Health protocols will continue to be observed.

Churches and other religious organizations can now hold masses and other gatherings at up to 50 percent seating capacity, from 10 percent previously.

Sporting events, gyms, work conferences and other related gatherings are now allowed provided only 50 percent of the maximum capacity is accommodated and social distancing is strictly observed.

Labella is also allowing public utility vehicles to operate during the MGCQ but said this will depend on the discretion of the Department of Transportation and the Land Transportation Franchising and Regulatory Board (LTFRB). (See related story on Page 4)

Inter-island vessels can operate provided only 50 percent of their maximum capacity is accommodated, Labella said.

Labella’s EO also allowed hotels, pension houses and other accommodation establishments to operate provided authority from the Department of Tourism (DOT) is secured.

Tourist attractions in the city will be allowed to operate but only at 50 percent of maximum capacity.

Amusement industries such as cockpits, restobars, cinemas and concerts are still not allowed.

“We will make the necessary adjustments if we find out that the implementation of these MGCQ guidelines under my EO will be strictly complied with,” Labella said.

“If the people have already adopted self-discipline and their body language has become compliant with the minimum health protocol, then adjustments have to be made,” Labella added.

Maru Lubino, Labella’s chief of staff, said senior citizens and those under 21 years old can go out of their homes to buy essential goods, avail of essential services or engage in activities authorized by the government such as outdoor exercises as long as they bring with them a quarantine pass.

Face masks are still required for people going out of their homes.

Labella urged constituents to always observe health protocols and avoid going out of their homes unnecessarily.

In Mandaue City, mass gatherings of up to 50 percent of the venue’s capacity are now allowed, according to EO 83 released by Mayor Jonas Cortes after the city’s quarantine status was relaxed to MGCQ.

For internet cafes, EO 83 said the customer’s use must only be for work and educational purposes.

Accommodation establishments such as hotels, resorts, apartments, tourist inns, motels, pension houses, private homes, ecolodges, condotels and bed and breakfast facilities, will be allowed to operate, but Mandaue City will issue permits only to those that have been issued a Certificate of Authority to Operate by the DOT.

Face-to-face or in-person classes are allowed for Higher Education Institutions (HEIs), but they must comply with basic health standards. Mass gatherings held in the HEIs are still prohibited.

John Eddu Ibañez, Cortes’ executive secretary, called on the public not to be complacent.

There will be no changes in the restrictions imposed by the Lapu-Lapu City government regardless of its downgraded MGCQ status from GCQ, said Mayor Junard “Ahong” Chan.

Chan said the only difference is that under the MGCQ, hotels and resorts can now operate in the city but only at 50 percent capacity and workforce to ensure physical distancing.

Guests and staff need to observe minimum health standards such as wearing of face masks at all times and frequent disinfection and sanitation.

For those who wish to go out of their homes, quarantine passes are still required.

The number coding scheme for vehicles and for those going to the market will remain in effect as a way to control the movement of people in the city.

Chan noted that a lot of people went out of their homes on Sept. 1, mistakenly thinking that they were now free to go out even without a quarantine pass since the city had shifted to MGCQ.

Chan vowed to deploy policemen in all areas to check the quarantine passes of those loitering around.

Tourists coming into Lapu-Lapu City via the Mactan-Cebu International Airport (MCIA) will be made to undergo a swab test at the MCIA.

In Cordova, strict border controls in major thoroughfares were removed on Sept. 1, which means that those living in Lapu-Lapu City can now enter the town unhampered, said Mayor Theresa Sitoy-Cho.

Before Sept. 1, Cordova was already under MGCQ since it is part of Cebu Province. But it had to place strict border controls since it is adjacent to Lapu-Lapu City, which was then on GCQ.

Unlike other areas in Cebu currently under MGCQ, Cordova will no longer require its residents to bring quarantine passes when they need to go out of their homes. It will also no longer require border passes from visitors.

Cho urged her constituents to continue to be vigilant and avoid unnecessary trips outside their homes.

In Consolacion, Mayor Joannes Alegado reminded his constituents that the Covid-19 virus remains even though they have shifted to a more relaxed quarantine status.

“We must not put our guard down. The more we should all be cautious because the risk of infection and transmission would be higher. The probability of Covid-19 spread would be greater; therefore, we must strictly and constantly observe all our health protocols,” Alegado said in a statement.

Part of the protocols they plan to continue even during the MGCQ is the use of quarantine passes and work travel passes (WTP) for those working in Cebu City.

The town’s curfew remains in effect from 10 p.m. to 5 a.m. Mass gatherings and drinking liquor in public remain prohibited in Consolacion, Alegado added.

In Talisay City, Mayor Gerald Anthony Gullas Jr. said despite shifting to MGCQ, some quarantine protocols such as quarantine passes and barangay schedules on when people can go to the public market and other commercial establishments to buy essential goods will remain.

Gullas said he plans to evaluate if the “Stay at Home Sundays” protocol, which prohibits business establishments, including those selling essential goods, from operating on Sundays, should remain.

Gullas said one good effect of the MGCQ is the opening up of the borders between Talisay City and Cebu City.