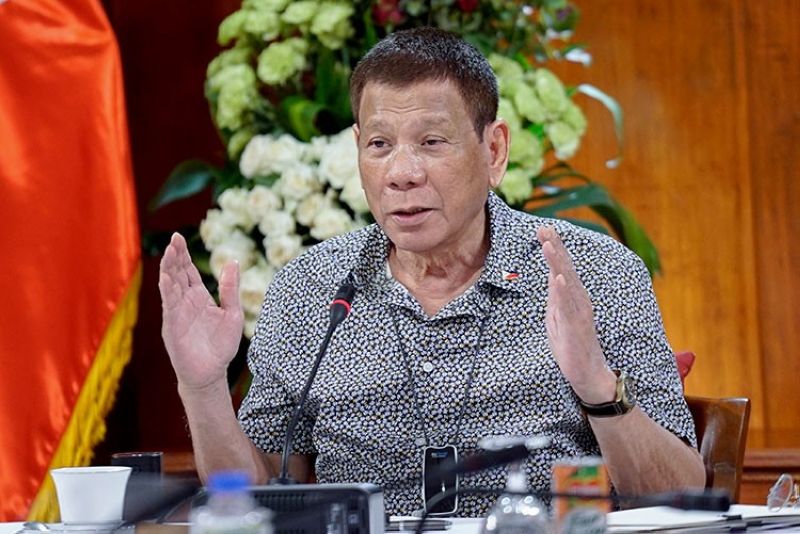 MANILA. In this handout photo provided by the Malacanang Presidential Photographers Division, President Rodrigo Duterte gestures as he meets members of the Inter-Agency Task Force on the Emerging Infectious Diseases at the Malacanan Palace in Manila, Philippines on Monday, August 30, 2020. (AP)

PRESIDENT Rodrigo Duterte publicly ordered the country’s top customs official to shoot and kill drug smugglers in one of his most overt threats during a deadly four-year campaign that has been the centerpiece of his presidency.

Duterte has steadfastly denied authorizing extrajudicial killings but has repeatedly and openly threatened drug dealers with death. He and the national police, which has led enforcement of his anti-drug campaign, have said most of the suspects killed by police during the campaign fought back and threatened the lives of law enforcers.

Duterte gave the order to Bureau of Customs Commissioner Rey Leonardo Guerrero in televised remarks from a Cabinet meeting on the coronavirus pandemic Monday night, August 31.

Guerrero, a retired army general and former military chief of staff, was not present when Duterte spoke, but the President said he met Guerrero and two other officials earlier Monday at the presidential palace in Manila.

“Drug is still flowing inside the country through customs,” Duterte said, adding he has earlier approved Guerrero's request for firearms. “I approved the purchase of firearms and until now you haven’t killed even one? I told him, 'Shape up.’”

“I told him straight, 'Drugs is still flowing in. I’d like you to kill there ... anyway, I’ll back you up and you won’t get jailed. If it’s drugs, you shoot and kill. That’s the arrangement,” Duterte said without elaborating.

More than 5,700 mostly poor drug suspects have been killed under Duterte’s anti-drug crackdown, which has alarmed human rights groups and Western governments and sparked an examination of alleged crimes against humanity at the International Criminal Court. Duterte has vowed to continue the deadly crackdown in his remaining two years in power.

Phil Robertson, deputy Asia director of the US-based rights group, said the UN Human Rights Council, which convenes this month, should establish an independent international investigation into the killings in the Philippines.

“The continuing carnage also explains why the international community led by the European Union needs to act decisively on this ongoing rights catastrophe in the Philippines and not be swayed by the government’s falsehoods about its record,” Robertson said.

Human rights groups have said their investigations showed some suspects were killed mercilessly then police officers altered the scene and placed firearms in the victims’ hands to make it appear that they fought back. Police have said the rights groups and critics should file criminal complaints in court if they have evidence against officers.

Duterte had placed the corruption-plagued customs bureau temporarily under military control in 2018 after two large shipments of illegal drugs slipped past the agency through the port of Manila.

A congressional investigation into how the large shipments of suspected methamphetamine slipped through the tightly watched port ended with recommendations of charges against some customs officials and internal reforms in the customs bureau. (AP)