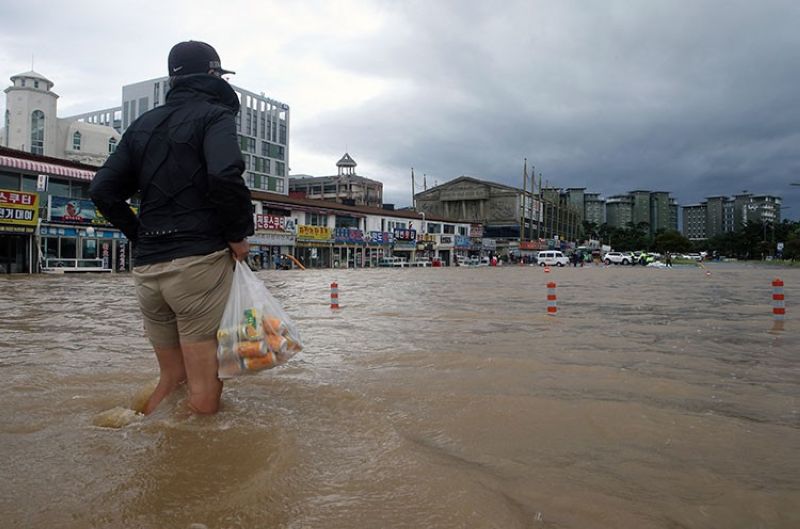 SEOUL, South Korea -- A powerful typhoon ripped through South Korea’s southern and eastern coasts with tree-snapping winds and flooding rains Thursday, September 3, knocking out power to more than 270,000 homes and leaving at least one person dead.

Japan’s coast guard was searching for a livestock ship carrying 42 crew members and 5,800 cows that made a distress call off a southern Japanese island in seas roughened by the typhoon early Wednesday. A Filipino crew member rescued late Wednesday said the ship capsized before sinking, according to the coast guard.

During its life as a typhoon, Maysak packed maximum winds of 90 miles per hour as it barreled through South Korea early Thursday.

More than 2,400 South Koreans evacuated their homes due to the typhoon, which damaged or flooded dozens of homes and vehicles, ripped off signboards and toppled scores of trees, utility poles and lampposts. A woman in the southern city of Busan died after being injured by shattered window glass.

Four nuclear power reactors near Busan automatically shut down because of electricity supply issues, but no leak of radioactive materials was detected, South Korea’s Ministry of the Interior and Safety said.

As of Thursday morning, officials have managed to restore electricity to about 199,400 of the 278,600 homes that lost power. The outages were mainly in southern mainland regions including Busan and the southern resort island of Jeju.

More than 950 domestic flights were canceled while rail services in some southern and eastern regions were halted due to safety concerns.

North Korea’s official Korean Central News Agency had said officials were working urgently to minimize damage from Maysak, which was forecast to make landfall in the country’s northeastern region in the afternoon.

KCNA said buildings, roads, railways, cropland and drainage systems were examined and fishing boats were moved to safety, while “scrupulous” protective measures were applied to power stations to ensure stable power supply during the storm.

Maysak caused mostly minor damage on the Japanese island of Okinawa on Tuesday and is the second typhoon to hit the Korean Peninsula in as many weeks.

Another storm in the Pacific was blowing north and forecast to affect northern Asia by the weekend. Tropical Storm Haishen could gain in ferocity before slamming into Japan’s southern islands of Kyushu and Shikoku before reaching the Korean Peninsula on Monday. (AP)