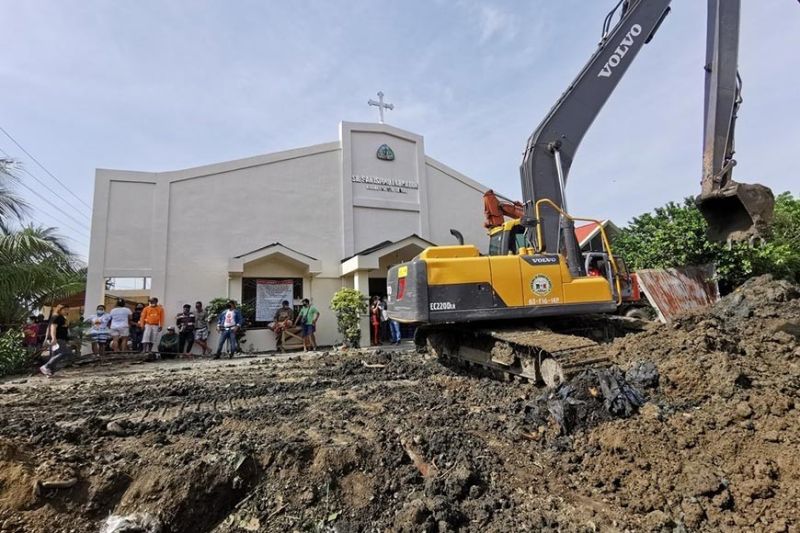 AN OFFICIAL from the Municipal Government of Santo Tomas in Davao del Norte admitted that the search and retrieval operation for the four men trapped inside a narrow vertical tunnel in Purok 1, Barangay Kinamayan is a struggle due to the ground's instability.

Santo Tomas Municipal Information Officer Mart Sambalud told SunStar Davao in a phone interview on Thursday, September 3, that the operation, now on its fifth day, is still about to proceed with its shoring operation as the Incident Management Team (IMT) is still finishing the installation of coconut timbers.

He said the installation is expected to be finished on the same day.

According to the official, the ground's instability was their main problem that they cannot proceed with the operation.

"Gamay na movement lang ato himuon (Even with small and careful movements), there is a huge risk that the ground would collapse. This was also attributed to the heavy downpours experienced in the previous days," Sambalud said.

The IMT initially estimated that the operation would take 10 days, but because of the unforeseen circumstances, he said it might be stretched for a few days more.

The four men trapped in the 96-foot underground tunnel are now presumed dead after the rescuers failed to get signs of life from the tunnel.

The victims identified as Kayl Castaneres, 18; Gerick Marquez, 23; Dindo Panares, 18; and Rustom Rancho, 18, were trapped under the ground after the soil softened, causing the tunnel to collapse around 10 a.m. Sunday, August 30.

Another treasure hunter, Ho Ang, managed to climb out of the tunnel after it collapsed for a second time. The timbers supporting the tunnel gave in after he got out.

He said the four who have been buried for almost 24 hours were presumed dead as water and mud blocked the passageway of air.

Meanwhile, Sambalud said the two houses near the perimeter of the tunnel site were demolished to give space for the timbers which will support the backhoes.

The local government had also executed a waiver and release of liability, and the property owners within the perimeter signed it. He said the waiver states that the government has no liability in any form of compensation related to the destruction of their properties caused by the search and retrieval operation.

Sambalud said authorities learned and confirmed that the excavated area was intended for a treasure hunting activity.

He added that the financier of the alleged treasure hunting was a relative of the owner of the property where the tunnel was found.

Based on their initial investigation, the financer initially said the tunnel was supposed to be for a water refilling station which began last March but was halted in April after the residents complained.

"They later flipped their statement when the government issued a stoppage order. They only made an alibi that the digged hole was for their planned water refilling station," Sambalud said.

During the interrogation, the financier said he tapped the trapped men to dig for treasure as they believed that this is where the Japanese soldiers had buried their gold during World War 2.

"According to the scanner, the area was allegedly the last garrison of the Japanese soldiers at the Battle of Ising River [in Carmen]. Their theoretical concept of the tunnel is anchored during the historical war of the Japanese era," Sambalud said.

He added that the people behind the tunnel digging were convinced of the scanner's story.

While he said that the government will be filing charges against individuals responsible for the incident, they are at present focusing on the retrieval operation and case build up.

The official said the parties responsible are aware of their action and are currently cooperating in their investigation.

Right after the incident, Santo Tomas Mayor Ernesto Evangelista gave a marching order to the Municipal Environmental and Natural Resources Office (Menro) and Municipal Planning and Development Office (MPDO) to conduct ocular inspection and closure of the existing tunnels with no permit to operate from the local government.

He said four tunnels in Barangay Talomo were discovered during their inspection, and that a stoppage order has been immediately issued for these four tunnels.

Sambalud said the Kinamayan incident is an "eye opener" and with this, the executive local government is now working for strict regulation of digging tunnels.

"This is a widespread problem, which was not really monitored and reported. This situation gave a strong position for the executive (department) to end this practice -- to allow in the barangay level to dig tunnels without letting the LGU (local government unit) know and with no quarrying permits," he said.