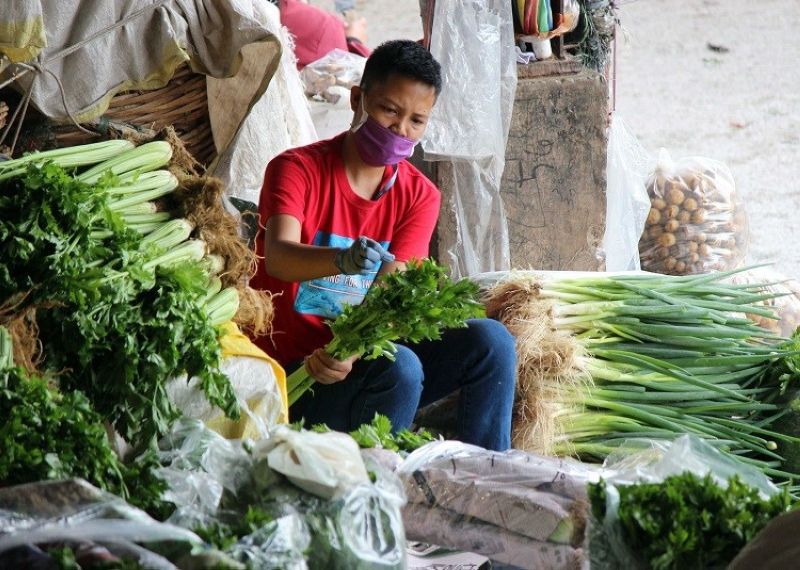 HIGHLY PERISHABLE. Vegetable packers at the La Trinidad Vegetable Trading Post sort celery and onion leeks before delivery to the different markets outside Benguet. The province on Tuesday, September 1, 2020, lifted the clustering of vegetable delivery in both trading post and Benguet Agri-Pino Trading Center. (Photo by Jean Nicole Cortes)

Diclas added drivers and helpers must still abide by safety protocols and assume full responsibility for their undisposed produce.

In April, an EO on clustering of towns for the unloading of vegetables at the LTVTP and BAPTC was issued, which seeks to discourage overcrowding and maintain compliance with the rules of social or physical distancing within trading posts.

In the scheme, other towns in the Cordillera region were accommodated as they have been delivering produce for the two trading areas.

Farmers from Mt. Province, Ifugao and Benguet were divided into two groups. The first group delivers produce every Monday, Wednesday and Friday while the second group brings vegetables every Tuesday, Thursday and Saturday.

However, during the Provincial Inter-Agency Task Force (PIATF) meeting at the Benguet Provincial Capitol on Wednesday, Diclas raised the concern on the clustering of scheme, citing they had been receiving response and also seen on social media that wanted to remove the clustered delivery of highland vegetables.

Buguias Mayor Ruben Tinda-an said some 50 percent of vegetable produce in trading areas come from their town and requested for the lifting of the clustering.

This was supported by mayors in the northern part of the province.

Kibungan Mayor Cesar Molitas noted the problem is the implementation of the clustering scheme, adding farmers complain that the schedules are not followed.

Upon further discussions, the governor together with the mayors reached the decision to lift the clustering of vegetables starting September 2.

With the number of vegetables delivered to LTVTP, BAPTC and other private trading centers, Diclas added there is a need for Benguet’s capital town to coordinate and strengthen the implementation of social distancing as they lifted the schedule for the delivery of vegetables.

He added with the good weather, there is an ample supply of vegetables from the province with prices of cabbage down.

The governor said the low prices of cabbage are attributed to the modified enhanced community quarantine imposed in the National Capital Region where there is less demand because people cannot go out of their homes easily.

Diclas added they will assess effects in the coming weeks with the Office of the Provincial Agriculturist (Opag) and Benguet municipal agriculturists that lead the study.

Meanwhile, League of Mayors in Benguet President and Itogon Mayor Victorio Palangdan during the PIATF meeting is pushing for the crop rotation program in Benguet towns to be implemented anew to address the problem on oversupply and low prices of vegetables.

The governor said this needs long term study and added they further tasked the municipal agriculturists and Opag to come up with the suggestion regarding the matter.

He also noted there are challenges in the implementation, citing farmers' belief in “to see is to believe.”