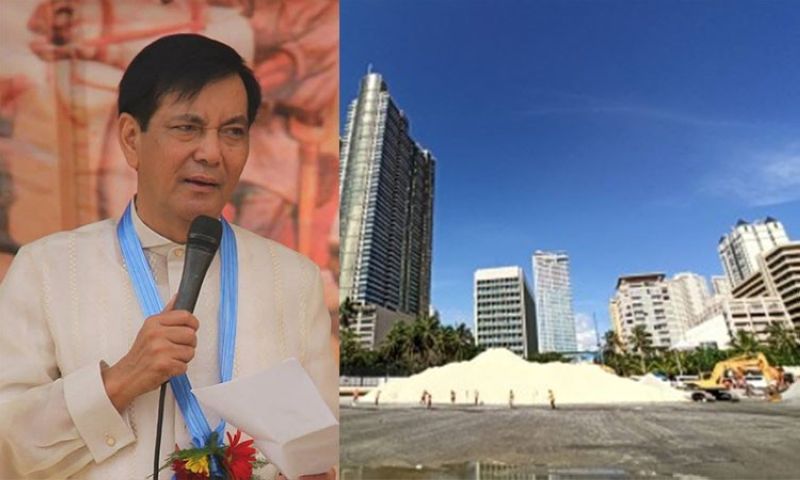 Cebu City Vice Mayor Mike Rama and a photo showing the overlaying of "white sand" on the beach of the Manila Bay. (Photos from Mike Rama's Facebook page and PNA website)

Last year, from September 6 to 11, Cebu City Mayor Edgar Labella left for Xiamen, China on an official trip, designating his vice mayor, Mike Rama, as acting mayor. Labella said he was confident that with VM Mike, "everything will be handled very well." Labella said Rama had served as mayor (for two three-year terms, in 2010 and 2013). "He knows the job, I need not tell him what to do."

Mike, however, said he hadn't received "any official communication" about it. No phone call or text message? But even that wouldn't suffice. Mike asked aloud, "How can I be acting (mayor) if I do not have the documentation?" Mayor Labella announced just last Wednesday, September 2, the doctor's diagnosis of gallbladder stones and that he was due for surgery the next day.

It's not known, as of this writing (Friday afternoon, September 4), if Mike had already started "acting." No news had come out about VM Mike's actual assumption of office: no photo op, or even just a paragraph in the PIO's news site. In the city's FB page, the top story was the "public advisory" that Saturday, September 5, cash aid for the city's seniors would start. (City Administrator Floro Casas Jr, and 327 others "liked" the news.) No story of any activity or pronouncement by the vice mayor acting as mayor, not even from the VM's own FB pages.

Cebu Provincial Board Member John Ismael Borgonia, chairman of the committee on environment conservation and natural resources, was quoted by news media as saying he was surprised and alarmed by the news report that dolomite rocks were hauled from Cebu to cover a 500-meter stretch of bay walk as part of the rehabilitation of Manila Bay.

If there were no controversy over the Manila Bay project itself, maybe Borgonia and the rest of the Cebuanos wouldn't have known about it at all. "It's like Cebu was robbed," said Borgonia.

He must mean that figuratively. Borgonia said there were no permits obtained for the dolomites -- or as far as he knows. But the materials must have been paid for; they weren't just taken away.

Controversy over the Manila Bay dredging project started as early as February last year but opposition had been tamed since the Covid-19 lockdown and resumed last May.

The arguments against it included its being an "urban-centric development," "mis-allocation, misuse and corruption," destruction of the environment, and its impact on human rights.

Cebuanos must worry too about the harm caused by the removal of the dolomites boulders that a DENR official said were dolomite boulders from Cebu that were crushed and used as filling material. If removing sand is illegal, hauling dolomite rocks is not? And from where particularly in Cebu were they taken? As Borgonia puts it, "We don't know."