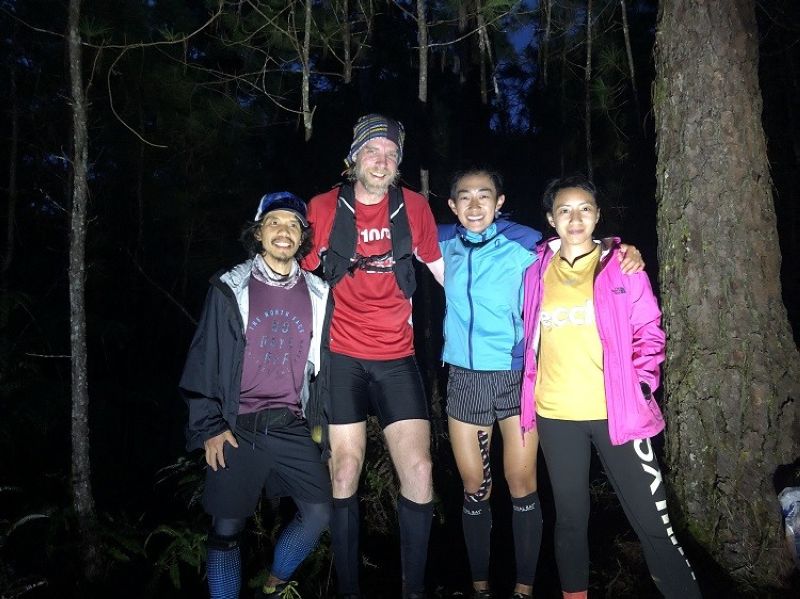 TEAM HELLEVATION. Robert Watson is a tough, strategic, well-experienced runner. Very passionate about what he does and does share his knowledge freely. He exudes the energy of determination; Sandi Abahan is our very own badass multi-awarded woman on trail running who never fails to inspire us of her passion for sports. She oozes energy of empowerment; James Tellias is a free-spirited runner. Once he sets his mind on the race, he will put a lot of effort into doing it. He emits energy to not-worry-too-much; Shine Briones has the least experience of trail running in the team and heavily is inspired by Girls Running in the Trail hence the grit and determination. (Contributed photo)

WHILE most of us are stuck at the comfort of our homes, four athletes are out breaking records of unimaginable elevation gain in a city where most trails or run routes are on lockdown.

Robert Watson, James Tellias, Sandi Abahan and Sunshine Briones, all accomplished Baguio-based trail and long-distance runners, hit the ground running by signing up for the ATG Vert – Race for Elevation Challenge hosted by Sportilicious Malaysia and Asia Trail Girls as “Team Hellevation” for the Philippines. The event is an ultimate elevation gain challenge where each team attempts to gain as many vertical meters as possible within 10 days (i.e. from August 15 to 24, 2020). Each member of the team should achieve 2,500 meters of elevation gain within the event time frame. Gaining the required ascent is not restricted in the trails or up the mountains. Participants can run at home, up their stairs, run up a car park, on an uphill road, treadmill, step up or at any place convenient to the runner.

The allure of this event according to Robert Watson who has joined many ultramarathon roads and trail races here and abroad was the fact that this event would not be won by the fastest or the strongest team but rather by the team of athletes who could endure the longest and climb the most vertical meters. James Tellias, a mountain trail endurance athlete joined the event in support of Asia Trail Girls bid to empower girls from all over Asia to discover the beauty of trail running and at the same time to motivate and encourage everyone to be active and fit amidst this global pandemic to fight off depression and the virus itself.

This virtual race was documented daily by the organizers on their Facebook page. Results were posted and videos and photos of participants were shared showing their journey. Team 4wesome’s Jason Lim from Singapore aired his day 2 ascent attempt live by climbing the stairs of a high-rise building giving no excuse for restrictions to achieve his goal of covering 1,200m elevation gain on day 2 equivalent to 10 stair climb repeats as each attempt yields approximately 125m elevation gain.

It’s all about teamwork for Team Hellevation with each runner averaging around 5,000 vertical meters on day 3 improving their ranking from 5th to 2nd spot. Whether they ran together as a team or on separate occasions because of different work schedules, the team has one goal in mind, to log-in an elevation as high as they can accomplish in a day regardless of location, route, medium, weather condition or time.

Serious questions were brought up during the race by Andre Blumberg, founder of HK Four Trails Ultra Challenge and HK 4in4 Challenge that sparked some interesting conversation like questionable results that were addressed right away by the organizers. The organizers used STRAVA to track individual and team totals. However, it is inevitable in virtual races to spot-on technical issues when people sometimes don’t fill up the sheet correctly. Given also that there is leniency in allowing different options in acquiring the required elevation, results may be affected. Like in the case of Team Legs Miserables, they did most of their runs on a treadmill which means no downhill running. This explains the short amount of time and d+ m/km.

The use of a treadmill leads to an interesting point raised by Valerie Legarde. She asked, “Why allow treadmill (with uphill only, no damaging quads on downhills) but imposing runners on the trail, as stated in the rules to also go down instead of climbing up and taking a bus to go back down?” The organizers' response to this query answers some hesitations that you and I may have over virtual races and something we can ponder upon.

“This challenge is about giving the opportunity for people to ‘race’ without having a real race to attend. Conditions are different for everyone. (Eg: Runners in Hongkong have the luxury of awesome mountains at their doorstep while runners in Singapore have nothing. Everyone has a different climate to deal with, not every day is ideal for running in every region). As a virtual race, we cannot control everything as we are not all running in the same place at the same time. We tried to come up with reasonable rules that will allow as many people to join as possible. We actually thought of the treadmill but decided to leave it as it is as we don’t really know anyone who would choose treadmill over a real mountain just to avoid downhill and potentially win. So treadmill is more of an option for those who can’t access mountains. Of course, it cannot be perfect but nothing ever is and we are just happy to finally get runners excited again and watch them challenge themselves.” - Asia Trail Girls

The event was participated by 140 teams from all around the globe. Majority of which were from Hongkong, Malaysia and Singapore. Five teams ran under the Philippine flag, namely, Bandilang Pinas, Team LDR, Team Lamon, Frankie Abubo Bravo with Team Hellevation emerging as champions accumulating a total elevation gain (EG) of 120, 228m within the 10 days followed by Team LBC/HKSC Lantau Warriors (EG: 104, 646m) and Crazy Running Club (EG: 100, 008m) both from Hongkong placing 2nd and 3rd respectively. #fileunderracingevents.