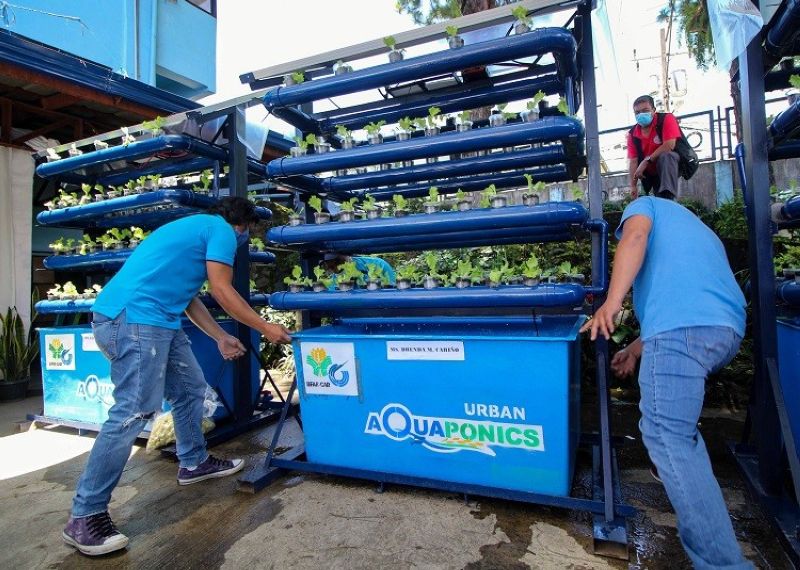 AQUAPONICS TECH. Ten beneficiaries from the fisherfolk community, academe and local government units and offices take home urban aquaponics technology provided by the Department of Agriculture-Bureau of Fisheries and Aquatic Resources in the region. This technology enables benefactors to grow fish and plants together in one integrated system. (Photo by Jean Nicole Cortes)

BAGUIO City residents are looking forward to producing fish and vegetables in their backyard through aquaponics.

In efforts to assure food security, the Bureau of Fisheries and Aquatic Resources in the Cordillera Administrative Region (BFAR-CAR) launched and turned over 10 solar-powered aquaponics, which was received by the Baguio City Government together with beneficiaries comprised of four fisherfolk, four secondary schools, Bayan Park Village and the City Veterinary and Agriculture Office.

Commodore Eduardo Gongona, BFAR national director, said raising fish and vegetables through aquaponics directly helps households as it ensures that food is available, affordable and sufficient under the Covid-19 pandemic.

“What happens in the pandemic, there is food, but how will it reach households? And so the best remedy that we will do is backyard farming. Here in the fisheries, we are encouraging them to venture into aquaponics because immediately you have fish and vegetables,” said Gongonga.

The implementation of the Urban Aquaponics is under the “Plant, Plant, Plant” program of the Department of Agriculture through BFAR.

For the program, P3.8 million was realigned to the region.

BFAR-CAR turned over 10 aquaponics to Baguio upon the request of the City Government while another six aquaponics were also given to Benguet, two in Kalinga and one each for Abra and Mt. Province.

Experts said aquaponics is the combination of raising aquatic plants or animals (aquaculture) and soilless cultivation of plants (hydroponics) that grows fish and plants together in one integrated system.

The waste products of the fish provide nutrients for the plants, while the plants filter the water for the fish that allows two species to share a symbiotic relationship.

The vertical urban garden is composed of a fish tank that serves as a chamber for the fish and the grow bed, composed of gravel, clay, and river rocks, where the plants are to be cultivated.

It also has a submersible water pump responsible for water circulation from the fish tank into the grow bed and a strainer to prevent rocks or debris from the bed from clogging the standpipe, which is built to control the water level in the grow bed to prevent flooding.

For beds, the most popular are made from plastic containers.

The technology also uses bell siphon, a device utilized to regulate the flow of water in the aquaponics.

The four-tier aquaponic design built by the agency can accommodate more than 100 plants and 100 fish in the tank.

Some of the common culture fish in aquaponics include tilapia, catfish and carp, while leafy green plants and fruit vegetables thrive well in the system.

BFAR-CAR said the water from the fish tank containing the waste products is pumped up to the grow beds where the plants are reared and where the filters are contained.

Schools and beneficiaries in the city thanked the agency and the city, adding it is a good opportunity for learners to realize said projects and an opportunity to teach skills and said advocacies to the learners.

Mayor Benjamin Magalong said with the technology, the city stands a chance in producing their own fish and vegetables.

“We are deeply honored to receive the project in the hopes that this will not only serve as inspiration in promoting resilient CAR but provide better nutrition for our people.”

BFAR–CAR revealed the region is only at 13.4 percent when it comes to fish sufficiency.

With the 86.4 percent shortage in fish, there are traditional interventions such as the establishment of fish ponds, fish cages and integrated systems and the promotion of aquaponics in urban areas.