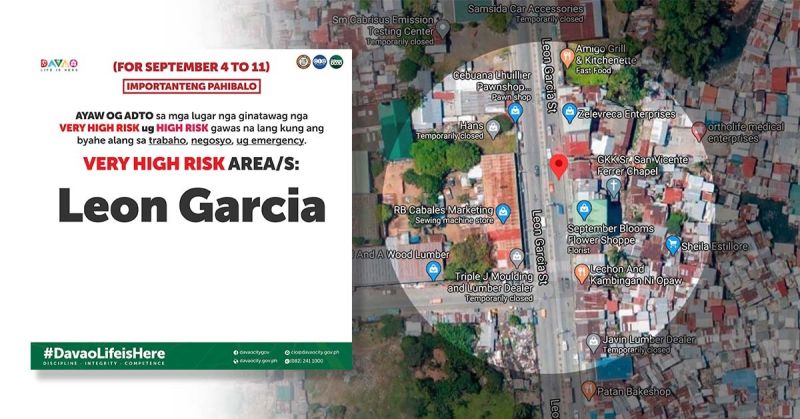 AN OFFICIAL from Barangay Leon Garcia in Agdao District, Davao City was surprised after the City Government classified the area under "very high risk areas" in its latest Covid-19 Risk Assessment Map.

Based on the September 4 to 11 assessment, Leon Garcia is the lone barangay in the city under the "very high risk" classification.

Leon Garcia Barangay Captain Lita Empis said she is concerned about the local government's recent assessment because based on the information she received as of September 7, the area only has eight active cases and all of them are asymptomatic and have already been placed in a quarantine facility.

Empis said she immediately contacted the City Government's Covid-19 Operation Center and the Department of Health (DOH)-Davao Region for clarification but had failed to get a response.

But she said she was able to communicate with Public Safety and Security Command Center (PSSCC) Head Angel Sumagaysay and he said they will have to reassess it in the coming days.

Empis said she is afraid that her constituents would be discriminated against even as some of them were affected by the recent fire incident that took place in Sto. Niño, Gotamco on September 3.

Based on the partial data from the City Social Welfare and Development Office (CSWDO), a total of 115 families were affected by the incident. Empis said the City Government immediately released assistance to the families.

According to her, some private sectors who initially pledged to give assistance to the fire-affected families were backing out upon learning that the area is classified as "very high risk."

Leon Garcia was once declared as one of the epicenters of the Covid-19 transmission in the city during the early months of the community quarantine due to its rising number of cases.

Because of this, Leon Garcia, Barangays Agdao Proper and 23-C were the initial areas classified under the "very high risk" classification.

Leon Garcia was also initially planned to be placed under hard lockdown.

It was, however, downgraded in the following weeks until it was later classified as "moderate risk areas."

Davao City Mayor Sara Duterte-Carpio said in a radio interview on Monday, September 7, that private sectors can drop their donation to the barangay and the city will be the one to distribute it to the affected families.

Meanwhile, Duterte-Carpio said the Davao City Operations Center for Covid-19 is in charge of updating the risk assessment map, which is done weekly.

She said there is a formula used for the Covid-19 risk assessment map currently posted on the City Government's website.

In very high-risk areas, among the factors used are the following: the population density; total confirmed cases; attack rate per population; and the behavioral index, comprising the number of the enhanced community quarantine violations and a number of 911 calls responded that can influence going out or crowding of persons.

But the mayor instructed to include an explanatory note on the next publication of the assessment map.

The city reminded the public anew not to travel to very high risk areas except for work, business and emergency.

Meanwhile, as of August 26, Leon Garcia has now over 51 total cases, 47 of which have recovered while one has died.