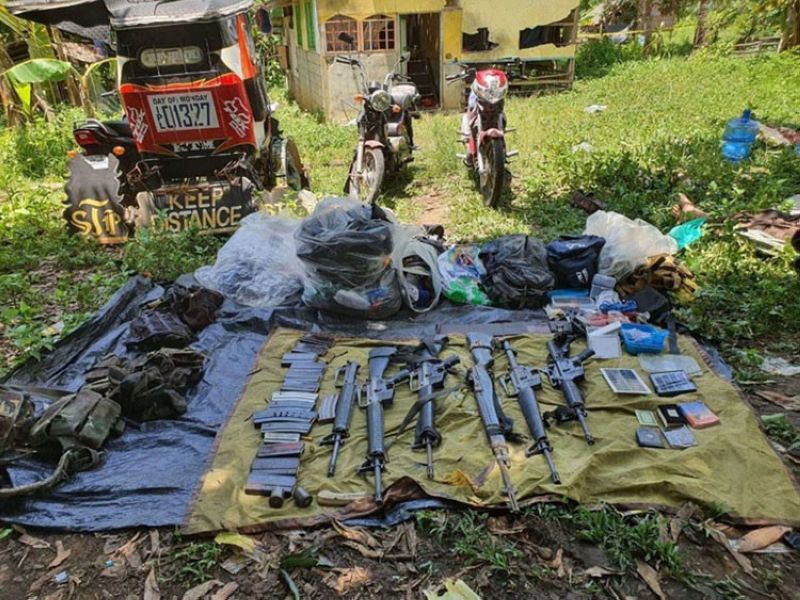 ZAMBOANGA. Five Abu Sayyaf bandits were killed and two soldiers were injured in a clash Wednesday, September 9, in R.T. Lim town, Zamboanga Sibugay. A photo handout shows the high-powered rifles and other war materials, including motorcycles and a tricycle the troops recovered after the clash. (SunStar Zamboanga)

FIVE Abu Sayyaf bandits were killed, while two soldiers were wounded in a clash with government troops in Zamboanga Sibugay before dawn Wednesday, September 9, 2020.

The wounded soldiers were immediately airlifted to Camp Navarro General Hospital, Zamboanga City. Both are in stable condition.

He said the police and military were conducting pursuit operations against the Abral Abdusalam and Sahibad Group when they encountered some 10 Abu Sayyaf fighters.

"This is the result of our pursuit operations against the armed elements of Abral Abdusalam and Sahibad Group led by Furuji Indama after our encounter in Barangay La Paz, Alicia, Zamboanga Sibugay dawn of Sunday, September 6, 2020," Templonuevo said.

The Abu Sayyaf bandits were in the area to carry out kidnappings, according to 102nd Infantry commander Brigadier General Leonel Nicolas.

The Abu Sayyaf bandits are led by Furuji Indama, a Basilan-based bandit leader with Abral Abdusalam and Sahibad crime groups as allies in Zamboanga Sibugay.

The crime groups serve as spotters of Indama's group for potential kidnap victims in the province.

"The unit would also like to thank the locals who tipped off the authorities of the presence of these terrorist groups, which resulted to the timely response of our troops," Nicolas said.

Major General Generoso Ponio, 1st Infantry Division commander, lauded the troops of 44IB and police forces for the successful clash against the bandits.

"Terrorism has no place in the area of responsibility of 1st Infantry Division and we urged the locals to remain vigilant and report to local authorities any presence of threats in their locality," Ponio said. (Third Anne Peralta-Malonzo/SunStar Zamboanga)