EXPLAINER: Dolomite issue not taken up by past Cebu governors, including Gwen. Lack of notice, public consultation and saving Siloy, ecology led to shutdown. 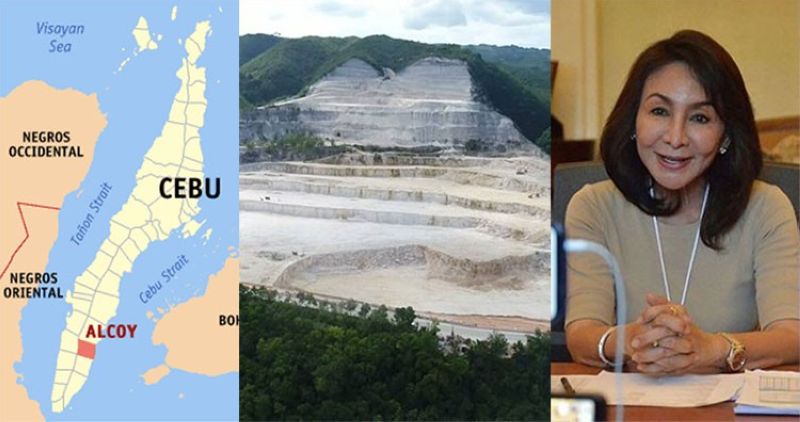 Photos from Wikimedia and Facebook pages of PMSC and Sugbo News

WHAT INITIAL NEWS DIDN'T SAY. The first news media stories about Cebu Capitol's cease-and-desist order against two dolomite companies based in Alcoy, Cebu did not make it clear that entire operations would be stopped.

Not just the mining and processing of dolomites for the Manila Bay rehabilitation but for every work activity, including processing and marketing, of the two companies: the whole business operation. And not just dolomite but all "quarry resources" they take out in whatever form from Alcoy.

DMC, which holds a "mineral production sharing agreement" with the government over a 571-hectare claim, started mining in 1998, while PMSC, a mineral processing permit holder that processes and sells the dolomites DMC produces, started in 2001.

If the dolomite operations have been inflicting damage on the ecology of the province, it has been going on for several years already. And under the noses of public officials -- more closely, the government leaders of Alcoy town, particularly those in Barangay Pugalo.

And it was not a protest from the people of Pugalo and the rest of Alcoy that prompted her move. EO #25 says it was the September 5 news story "in national and local newspapers" about the controversy in Manila. The furor has been over the use of "fine white sand," which turned out to be crushed dolomite rocks from Cebu, to beautify a stretch of the Manila Bay coastline.

PROTECTING ENVIRONMENT, SAVING 'SILOY.' The primary reason for the order is "to prevent more damage" to the "terrestrial environment" in Alcoy. The town, Capitol says, is an "environmentally critical area," having been declared as habitat of the famous bird "siloy." Moreover, the EO says, the extraction of dolomites is being conducted "in an area with critical slope."

Saving the people would be more compelling argument than saving the Black Shama, though "endemic in the island" and endangered. The threat to the workers and public safety of the townsfolk, if proven true, is mentioned marginally, almost a side note.

It may be because actual danger to environment and public safety has not been measured. There was no study on the dolomite projects' impact on environment or public safety -- or there is no showing there was one.

If the records show that an impact study was made, the next question is whether there was a periodic review of the study since the operations have already gone on for several years.

If there were illnesses or injuries or deaths of people that could be traced to the operations of DMC and PMSC, none has reached public attention.

As to adverse effects on the environment, the agencies enforcing the laws are not telling. The two transport ore permits MGB-Central Visayas issued for PMSC to ferry "seven wet metric tons" of dolomite showed that, to the regulators, there is no problem involving ecology or the people's well-being.

AUTHORITY THE GUV USES. Capitol lawyers were on a roll, throwing at EO readers a lot of legal provisions and principles to support Governor Garcia's action against the two dolomite companies.

Here are some: The basic laws and regulations, including the Constitution, Local Government Code, Mining Law and DENR administrative orders.

And such precepts as "precautionary principle of environmental law," environmental doctrine on "hard look," the general welfare clause, and the constitutional right to "a balanced ecology in accord with the rhythm and harmony of nature."

ALLEGED VIOLATIONS. The EO cites the violations that, it alleges, form the basis for what critics may see as "drastic and dramatic move."

There was, or there must have been, no environmental impact study. That study would've also met the requirement of public notice and consultation, components of the transparency rule set by the Mining Law. At the same time, there is yet no assessment on the actual damage that may have been caused by the operations of the two companies for two decades or so.

And the main reason reported in the initial news stories: failure to inform the Provincial Government and the Municipality of Alcoy about the Manila Bay project.

That must stump some observers who wonder why the Capitol and the town must be told the destination and recipient of dolomites from Alcoy. Several similar shipments must have been made, to various buyers, and for different uses through the years. Did Capitol or Alcoy town require by ordinance prior notice? Is the information not required only by MGB under DENR rules?

Would the province have complained if the cargo went somewhere else and did not stir a hornet's nest? Perhaps they can look into the transport permits and find out where all those other shipments of dolomites were used.

COLLATERAL DAMAGE. The principal entities that are bound to suffer economic damage are the two companies that are ordered to be shut down.

Those expected to be hurt economically too are the workers from Alcoy and nearby towns employed by DMC and PSMC. No information yet has come out on number of employees and dependents. Are they paid by the companies during the closure?

Then there must be the small businesses that thrive on the operations of the two firms. In this time of the epidemic, the shutdown of DMC and PSMC will mean increased assault on depleted earnings.

This must be what first worried Alcoy Mayor Michael Sistoso when he heard the news about the Capitol order. The companies can bear their losses. The mayor's people might not.