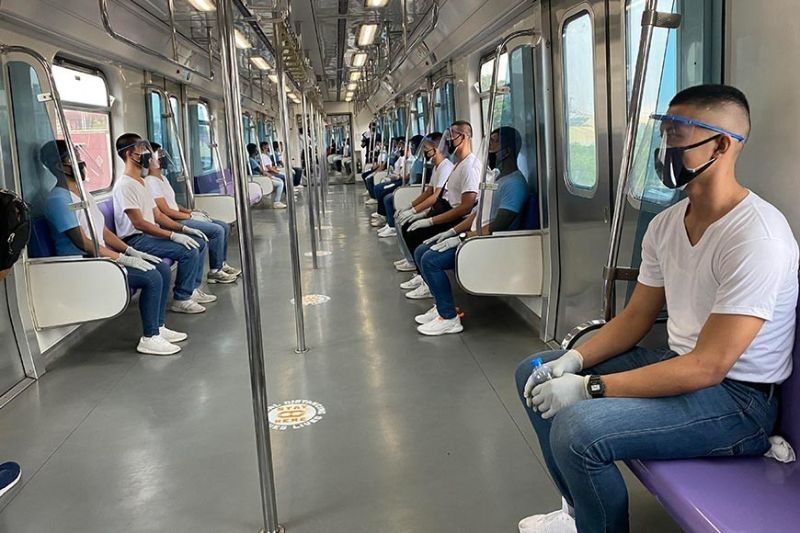 MANILA. At a one-meter distance between passengers, MRT-3 can carry only 153 people per trainset at one time. (File Photo)

BEGINNING Monday, September 14, 2020, the required physical distance between passengers inside public transport units will be reduced to 0.75 or 3/4 meter from the current one meter to increase ridership.

Commuters are still required to wear face masks and face shields inside public transport units. They are also prohibited from talking or making phone calls onboard.

Transportation Secretary Arthur Tugade, in a statement issued Friday, September 11, said the Inter-Agency Task Force (IATF) for the Management of Infectious Diseases approved their proposal which was made together with the economic development cluster (EDC).

“There is a need to safely optimize the carrying capacity of the various public transport modes as Metro Manila and its adjacent areas continue with the transition towards the ‘new normal’ where more workers are expected to return to their reopened workplaces and more businesses are expected to resume operations that were stopped during the enforcement of strict quarantine measures,” Tugade said.

In Cebu, progressive transport group leader Greg Perez urged the government to allow the return of traditional public utility jeepneys, or the old units, in the cities of Cebu and Mandaue, instead of cutting the physical distance between passengers.

Perez, chairman of Pinagkaisang Samahan ng mga Tsuper at Operators Nationwide (Piston) Cebu, believes that the IATF was forced to amend its social distancing policy inside public transportation units as the current modes of transport—buses and modern jeepneys—cannot accommodate passengers, mostly employees reporting back to work.

Traditional jeepneys are already allowed to operate in all areas in Central Visayas except in Cebu City and Mandaue City.

Perez believes more commuters will be susceptible to the coronavirus with the IATF decision.

Around 7,000 traditional jeepneys in Cebu City and Mandaue City are grounded, according to Perez.

The IATF decision was welcomed by Land Transportation Franchising and Regulatory Board (LTFRB) 7 Director Eduardo Montealto Jr. as more passengers can be accommodated.

Montealto, however, has yet to receive the official guidelines from the central office on how to implement the new IATF decision. The LTFRB is one of the Transportation Department’s attached agencies.

He assured the public that the new buses that will be deployed in Mandaue City and Cebu City will be enough in transporting workers.

In addition to modern jeepneys, most buses servicing the cities of Cebu and Mandaue ply inter-province routes, meaning they are allowed to pick up and transport passengers from other local government units.

Allowing traditional jeepneys to operate can worsen the traffic now felt in some parts of Metro Cebu, Montealto said.

The DOTR, in its presentation before the recent IATF meeting, said the physical distance between passengers can be reduced considering the strict health protocols being enforced against coronavirus disease 2019 (Covid-19).

Commuters are required to wear face masks and face shields inside public transport units as well as in other public places and workplaces.

The reduced physical distance will increase the number of passengers that may board a public transport unit at the same time.

In aircraft and passenger ferries, more passengers may now enter airports and seaports.

Passenger load capacity in roll-on-roll-off ferries will increase 75 percent at a 0.75-meter distance, 85 percent at 0.5 meter and 100 percent at 0.3 meter from the current 50 percent.

MRT-3 will increase its passenger load per trainset to 204, 255 and 286 from the current 153 while the Philippine National Railways will be able to carry 184, 256 and 320 under the new physical distancing rules from the current 166 people.

“With public transportation, there is faster recovery of lives and livelihood as we push forward under the new normal,” Galvez said. (Marites Villamor-Ilano/SunStar Philippines)