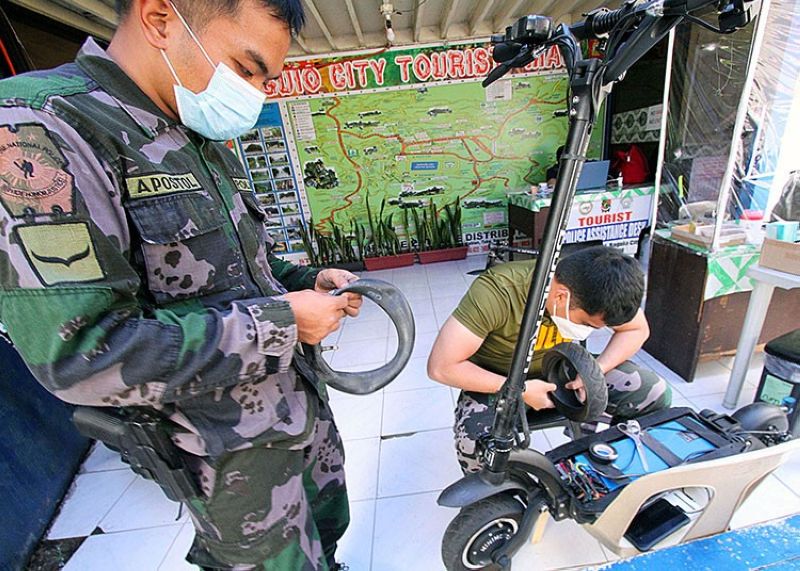 MAINTENANCE. Tourist police officers troubleshoot their e-scooter in preparation for the tourism opening and easing of travel restriction of domestic tourist in Baguio City coming from Ilocos. These e-scooters are used to patrol and secure major parks in the city like Burnham Park. (Jean Nicole Cortes)

STAKEHOLDERS are trying to clarify that Benguet towns have not been bypassed on the opening of Baguio City to tourists coming from Ilocos after Tuba Mayor Clarita Sal-ongan called out the city for not consulting neighboring local government units.

After the Sal-ongan pronouncements, more towns in the La Trinidad, Itogon, Sablan, Tuba and Tublay aired concerns on the seeming unilateral decision of the city to open tourism for Ilocos.

Jovita Ganongan, officer-in-charge of the Department of Tourism (DOT)-Cordillera, clarified "on the part of Mayor (Benjamin) Magalong, what he meant was as per our information, Benguet is not willing to reopen yet for tourism so they were not included in the green lane agreement and discussion."

"The whole plan is to just start the ball rolling and hope that it will serve as a good model that could become a benchmark for the eventual reopening of the rest of CAR (Cordillera), particularly La Trinidad-Itogon-Sablan-Tuba- Tublay (LISTT)," Ganongan said.

In an earlier statement, Magalong said that at the outset, he made it a point to ask the OIC regional director of the DOT-Cordillera being a partner in the city-initiated venture to first consult not only Benguet but all provinces in the region if they are willing to participate in the program, as he is aware that whatever endeavor the city undertakes should involve the neighboring towns.

"I was told that our CAR partners had begged off for the time being as they were still not ready to reopen to tourists and had agreed instead to first observe the mechanics of the Baguio program," said Magalong.

"That is why we know that Benguet is not keen on reopening as reported by their tourism officers. Hence, in due respect to Benguet's decision, Baguio's tourism team confined the planning and discussion of a green lane within Baguio and Region 1 select areas," added Ganongan.

Magalong said it has come to his attention that his LISTT counterparts had expressed displeasure over their supposed non-involvement in the program on the reopening of tourism in the city after an agreement was recently forged with Ilocos.

"May we clarify that the City of Baguio never intended to preclude our LISTT partners from being involved in the undertaking. The information reassured us that everyone was consulted or that nobody was left out in the planning process, so we moved on with the project," Magalong said.

He added: "We wish to clarify that as per the initially agreed mechanics, the program will strictly follow the tour package scheme where tourist movements will be restricted and confined to the city and thus will not affect other areas. The involvement of our neighboring towns is important as program participants need to pass through them to gain access to the city and this we acknowledge and never intend to disregard. Coordination on border and checkpoint management however can only be done once the guidelines have been finalized and approved by the National IATF."

Magalong said the opening was broached not for the benefit of Baguio City alone, as it will serve as a springboard to reboot the economy of the region as well.

"As with our other undertakings more recently the initiatives to deal with the pandemic, we have actively involved the BLISTT and the whole region.

Rest assured that this partnership will continue as we look forward to joint tourism ventures with our neighbors once they are ready in the same way that our cooperation will hold as we strive to overcome this health crisis, rebuild our economies and face whatever challenges that may come along," Magalong added.

Baguio has agreed to gradually open tourism on September 21 for tourists coming from Ilocos only, creating packages facilitated by accredited tour operators in assisted visits to the city, following strict health protocols and standards.