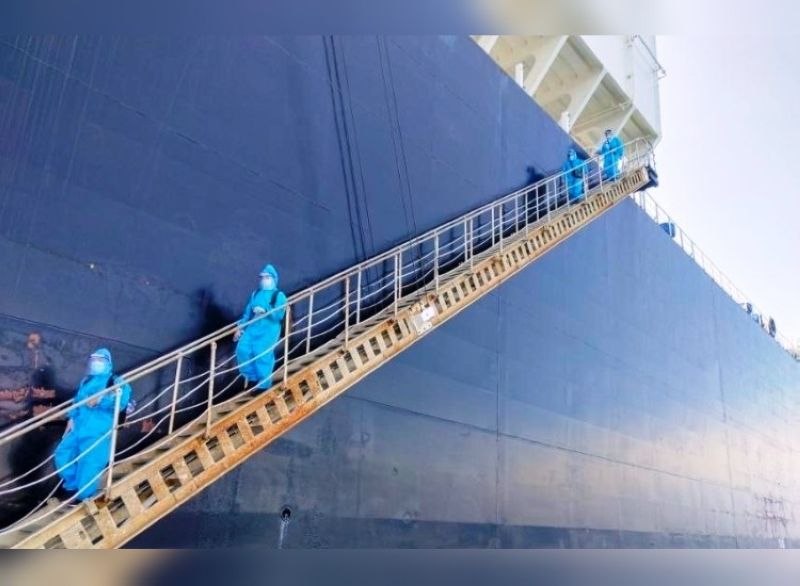 CLARK FREEPORT -- Subic Bay Freeport has started operations as a crew-change hub with the arrival here of five Filipino seafarers who finally disembarked after being stranded aboard their ship for several months due to port restrictions during the Covid-19 pandemic.

Subic Bay Metropolitan Authority (SBMA) Chairman and Administrator Wilma Eisma said this was the first batch of crewmen to arrive here after Subic was designated by the Inter-Agency Task Force for the Management of Emerging Infectious Diseases (IATF) as a hub for an international crew change.

The five Filipinos disembarked from MV Dapeng Star, a liquefied natural gas (LNG) tanker based in Hong Kong on September 10.

“The operation went without a hitch and was over in just a matter of three hours,” Eisma said.

She recounted that at 7:40 a.m., a tugboat left the San Bernardino jetty here to meet up with Dapeng Star, which had anchored near Grande Island at the mouth of Subic Bay.

The tugboat carried personnel from the Maritime Industry Authority (Marina) and the Coast Guard, who conducted the initial health check-up of the inbound seafarers and had them suited up in personal protective equipment (PPE) before disembarkation.

“At 10 a.m., the tugboat was back at the jetty, the five seafarers in blue PPEs got off, had their baggage checked by K-9, boarded a van to the One-Stop-Shop (OSS) at the Subic airport where they got swabbed for RT-PCR (reverse transcription-polymerase chain reaction) test and had their documents processed by the Bureau of Quarantine and Bureau of Immigration,” Eisma said.

“At exactly 11:14 a.m., or just over three hours, the seafarers were already departing for the Manila Grand Opera Hotel, which shall serve as their quarantine facility for 14 days,” she added.

The opening of the Subic crew-change hub is expected to ease the current congestion in Manila Bay where merchant ships with Filipino crewmen await their turn to disembark their crew and take in fresh personnel. The Philippines is among the biggest suppliers of manpower in the shipping industry today.

Eisma pointed out that the problem on crew-change does not only concern crewmen longing to go home to their families or the congested ports where ships wait their turn to disembark their crew.

“It is, in fact, a problem of huge proportion because it affects the global supply chain,” she said. “With the start of crew-change operations here, Subic becomes a part of the solution to this global problem,” she added.

The Department of Transportation (DOTr), which spearheads the inter-agency project, said the Subic operation is part of the “Philippine Green Lane,” put up for the speedy and safe travel of seafarers and swift crew change during the Covid-19 pandemic. The other crew-change hubs are the Port of Manila and Port Capinpin in Bataan.

Subic was designated as a crew change hub in July and was formally opened on August 22. However, operations here only involve point-to-point embarkation and disembarkation pending approval of the second phase where inbound seafarers could quarantine in local hotels after their RT-PCR test.

DOTr Assistant Secretary Narciso Vingson, who supervised the maiden crew-change operation in Subic, stressed that crew-change protocols were strictly observed and that a “no-contact” policy was put in place to ensure the safety of the seafarers and the attending personnel.

Vingson said that prior to debarkation, the seafarers were made to undergo customs, immigration and quarantine procedures onboard the ship. Thereafter, they were debriefed, RT-PCR tested and processed at the Subic OSS, before being transported to a mandatory quarantine facility in Manila.