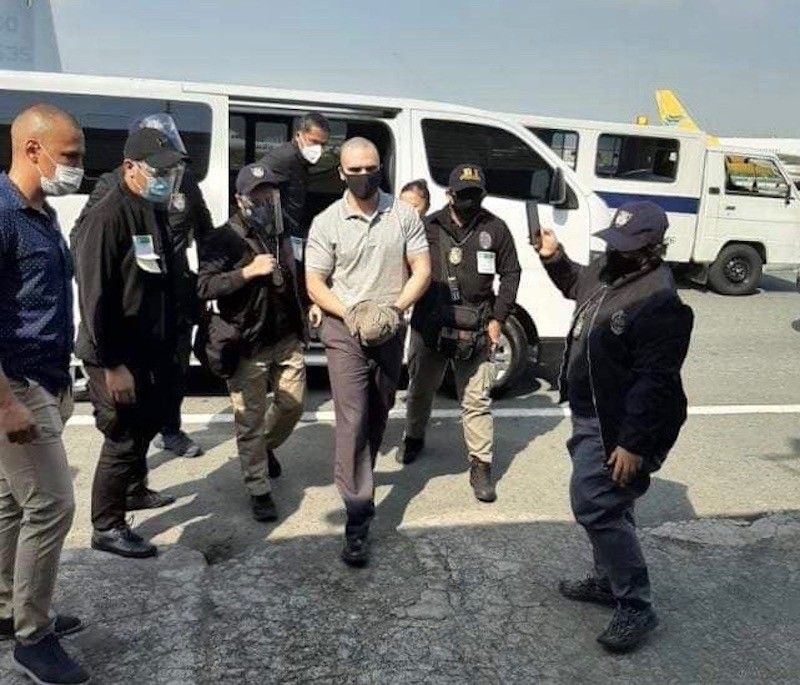 MANILA. US marine Lance Corporal Joseph Scott Pemberton (center) is taken to the airport for his deportation on September 13, 2020. (Bureau of Immigration photo via state-owned PTV)

(He was accompanied by some members of the US military. US Embassy personnel saw him off while BI agents escorted him.)

She said Pemberton had completed the documents and clearances for his deportation and he also tested negative for Sars-CoV-2, the virus that causes coronavirus disease 2019 (Covid-19).

Since he was declared by the BI as an undesirable alien in 2015, Pemberton can no longer re-enter the country.

Pemberton was sentenced to six to 10 years of imprisonment after he was convicted of homicide in December 2015 for killing Laude in a motel in Olongapo City in October 2014.

On September 1, the Olongapo City Trial Court issued an order releasing Pemberton, saying he had served more than 10 years in detention due to the good conduct time allowance (GCTA) granted to him for good behavior.

In a statement Sunday, the US embassy in Manila said Pemberton has already fulfilled his sentence.

“All legal proceedings in the case took place under Philippine jurisdiction and law. Lance Cpl. Pemberton fulfilled his sentence as ordered by Philippine courts and he departed the Philippines on September 13,” it said. (SunStar Philippines)