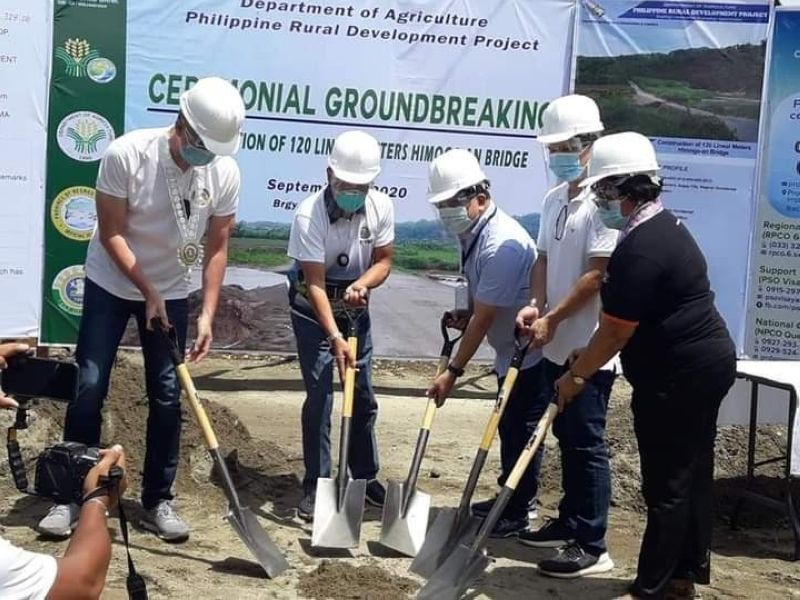 SAGAY. Groundbreaking of the P76.3-million Himoga-an Bridge in Sagay City recently, which is seen to boost local farmers and producers. (Contributed Photo)

THE impending P76.3-million Himoga-an Bridge to be constructed in Sagay City is seen to boost local farmers and producers as it will link them to the market.

Officials of the provincial government and the Department of Agriculture (DA) in Western Visayas broke ground for the project at Barangay Bato in the northern Negros Occidental locality last week.

Governor Eugenio Jose Lacson and DA-Western Visayas Director Remelyn Recoter lead the groundbreaking of a 120 linear-meter bridge to be constructed in the area under the Philippine Rural Development Project (PRDP).

DA-Western Visayas, in a statement, said it is the government's firm commitment to founding a modern, climate-smart and market-oriented agri-fishery sector in the region through providing the people access to better and improved roads and other infrastructures.

The agency said the project would cover at least 4,136 household beneficiaries along the rural barangays of Bato, Baviera, Colonia and Sewahon, and would connect them to other barangays of Sagay City and those of nearby Cadiz City.

The project to be completed September next year also envisions to lessen the risks of overflows or floods which are prevalent in the area, it added.

For her part, Recoter thanked stakeholders for helping in bridging the gap to provide such vital infrastructure in the area.

Recoter said this will bring progress and development to the lives of the farmers and the community, especially during this pandemic.

Negros Occidental is the biggest funded province in the region under the World Bank-DA-PRDP amounting to P733 million, she added.

Also present at the activity were Second District Representative Leo Rafael Cueva and other provincial and city officials.

Meanwhile, after the groundbreaking, officials also inspected the status of Sagay Feeder Port connecting Tabuelan in Cebu, and Estancia in Iloilo.

The said fish landing facility, which is also a PRDP project worth P153.5 million, was made to benefit more than 2, 000 farmers and fishers.