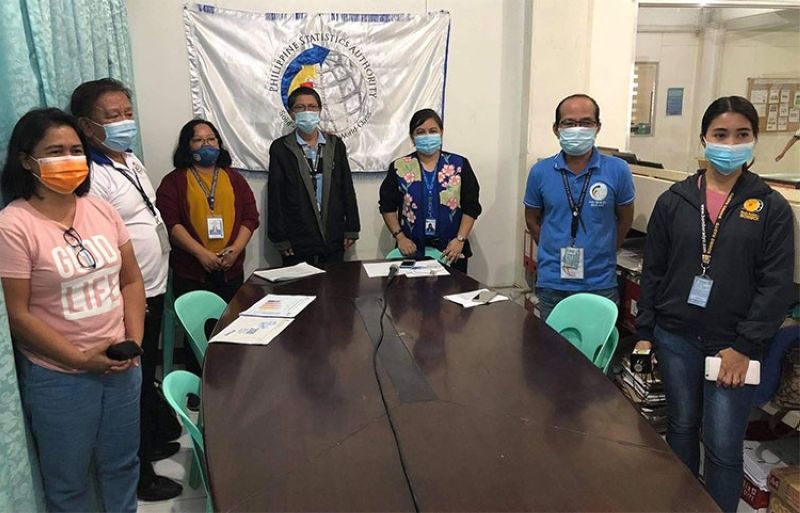 PANGASINAN. Philippine Statistics Authority Regional Director Sheila De Guzman (3rd from left) and Provincial Chief Statistician Edgar Norberte (4th from left) enjoins everyone to participate in the 2020 census of Population and Housing by giving truthful and accurate information to the enumerators. The 2020 CPH is conducted from Sept 1-30, 2020. (PIA/VHS)

THE Philippine Statistics Authority (PSA) started the 2020 Census of Population and Housing (CPH) on September 1, covering all 44 towns and four cities of Pangasinan.

Provincial Chief Statistician Edgar Norberte said the CPH refers to the entire process of collecting, compiling, evaluating, analyzing, publishing and disseminating data about the population and living quarters in the country.

Norberto said the census aims to provide government executives, policy and decision makers and planners with population data, especially updated population counts of all barangays in the country on which to base either their social and economic development plans, policies or programs.

The census, which was supposed to be held last May, was moved to September because of the Covid-19 pandemic. Reference period, however, remains at 12:01 a.m. of May 1, 2020.

Recruitment of enumerators has also given part-time livelihood to some 3,000 Pangasinenses who lost their jobs during the pandemic, he added.

Ferdinand Jocutan, supervising statistical specialist, said aside from the hired enumerators, there are several layers of checking to ensure the accuracy and veracity of the data gathered. Each enumerator is headed by a team supervisor who in turn is also being checked by an area supervisor. PSA employees are the last layers who conduct spot checking and major coordination in the field.

"Ang battle cry ng census ay 'no one must be left behind' that is why we ensure na lahat ng bahay ay napuntahan at walang malalagpasan," Jocuta said.

Senior Statistical Specialist Arturo De Sola said even with the aim, PSA ensures the safety of enumerators and has also devised other means to perform census which will take about 15-30 minutes to answer.

Some started later than September 1 because of towns declared under lockdown or some barangays were temporarily not open for visitors because of contact tracing activities.

Republic Act 10625 or the Philippine Statistical Act of 2013 states that PSA is primarily responsible for all national census and surveys. The 2020 CPH is the 15th census of population and 7th census of housing to be undertaken in the country since the first census in 1903. (PIA)