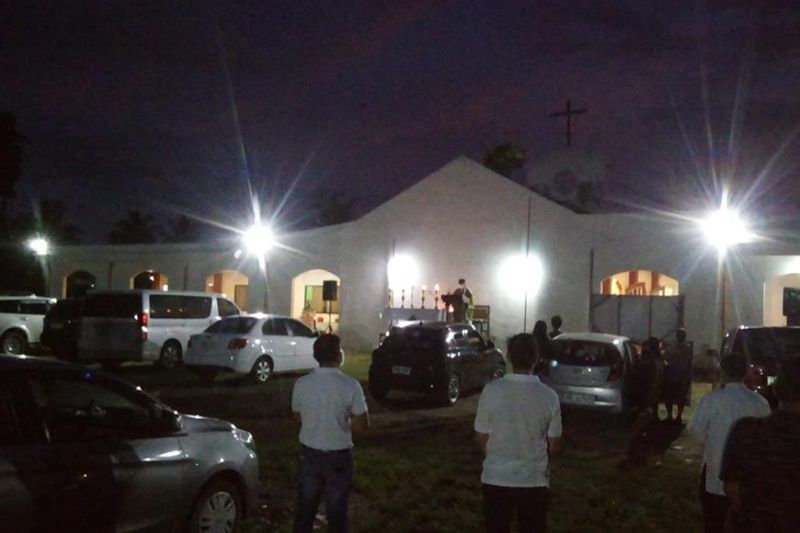 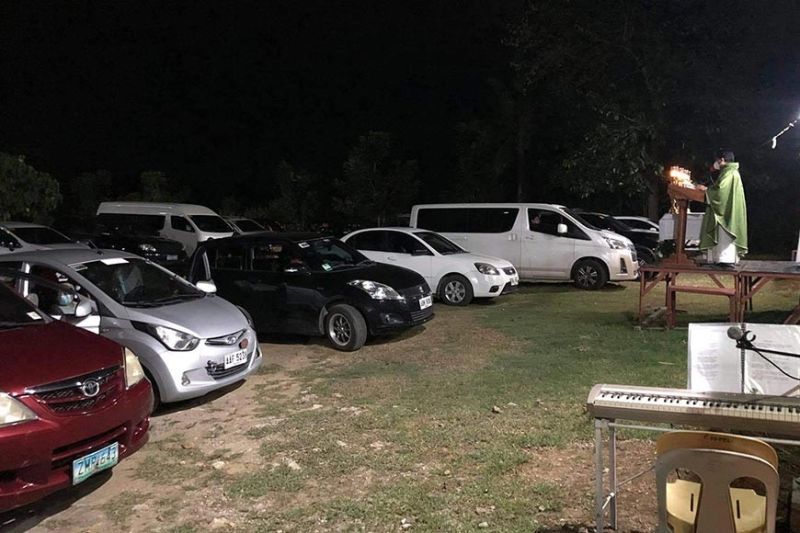 "I was thinking about this for so long already. Now is the right time since people are afraid to go to Mass for fear of close contact yet they are hungry for the Eucharist," said Fr. Kim Margallo of the mission station located in Barangay Apitong, Tacloban City.

During the Mass, attendees can park their cars and participate with no physical contact.

"There is no need for QR code and other prerequisites since they don't go out of their cars. Only during communion that they will roll down their windows and Eucharistic ministers will go around with mask and face shield," Margallo said.

About 25 cars with families inside came during the first scheduled Mass at 6 p.m. Sunday, September 13.

Those who do not have vehicles stayed inside the church after undergoing the usual health safety protocols.

With the current community quarantine implemented in the city, Margallo said the church has to be creative to continue its evangelization and be "able to serve the people of God in the best place possible."

"People are clamoring for the physical attendance of the Mass. That's why I thought of adopting an outdoor Mass, especially that coronavirus infections are increasing in our place," he said in a report from Catholic news site Licas.news.

According to Margallo, attending the Mass, being the highest form of prayer, is an experience that requires a full and active presence.

"The proper way to celebrate the Mass is to be physically present, not the online attendance because it is not the normal way of attending the Mass," he added.

After receiving favorable feedback from the parishioners, Margallo said they will improve the arrangement of vehicles in the parking area so that more churchgoers will be accommodated.

The parking space occupies about one-fourth of the one-hectare mission station.

"If more people will come, then we'll open another Mass schedule in the evening," said Margallo, who also launched an online Mass due to the ongoing health crisis.

Fr. Chris Arthur Militante, spokesperson of Palo Archdiocese, said the opening of drive-in Mass in the entire Archdiocese will depend upon the Archbishop and the set-up in the parishes.

"Not all (parishes) have large parking spaces," he said.

"The Archbishop also strongly encourages us, priests, to be creative in our pastoral ministry in this time of pandemic," Militante told SunStar Philippines.

Meanwhile, Margallo urged other religions and denominations to adopt the drive-in Mass "to keep their people guided and to nourish them spiritually."

He admitted that the pandemic has already created boundaries in the respective faith and religions of the public.

"If the physical and psychological capacity of man is tested and challenged, we need spiritual nourishment," said Margallo.

Earlier, a Vatican official maintained that "virtual" Mass cannot replace the physical presence of the faithful during the liturgy.

"As soon as circumstances permit... it is necessary and urgent to return to the normality of Christian life, which has the church building as its home and the celebration of the liturgy," said Cardinal Robert Sarah, prefect of the Congregation for Divine Worship and the Discipline of the Sacraments.

"As soon as possible, we must return to the Eucharist ... with an increased desire to meet the Lord, to be with Him, to receive Him and to bring Him to our brothers and sisters with the witness of a life full of faith, love and hope," Cardinal Sarah added.

According to him, the "physical contact with the Lord is vital, indispensable, irreplaceable." (SunStar Philippines)