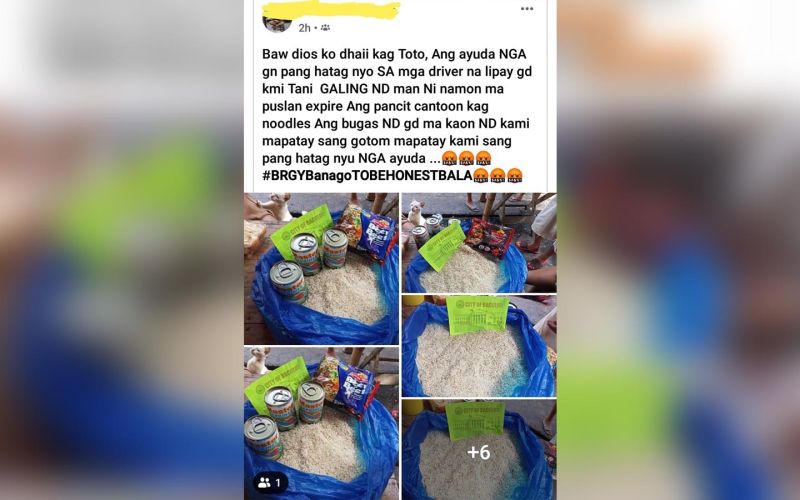 BACOLOD. A screen capture of the Facebook post of a resident expressing dismay over the alleged expired and spoiled food packs, particularly noodles and rice, distributed by the Bacolod City Government as aid to drivers affected by the implementation of modified enhanced community quarantine.

A RESIDENT of Barangay Banago in Bacolod City took to social media to express dismay over the alleged expired food packs given by the City Government as aid for public utility vehicle drivers affected by the implementation of modified enhanced community quarantine (MECQ).

The netizen posted on Facebook the relief goods her family has received. This contains sardines, noodles and rice.

In her post, which was making rounds on social media Monday, September 14, she claimed that the noodles, including the pancit canton, are already expired.

She added that the rice given to them is no longer good to eat.

"Lipay kami tani galing indi man ni namon mapuslan [though we are happy, we cannot make use of it]," the post stated, adding that "indi kami mapatay sa gutom, mapatay kami sa panghatag ninyo nga ayuda [we will not die of hunger, we will die with the kind of aid you are giving]."

He said Monday, September 14, that more than 600 public transportation drivers in Barangay Handumanan received the food packs last week, but most of them were disappointed because the goods were expired and not suitable for human consumption.

He said each driver received a food pack with five to seven kilos of rice from National Food Authority (NFA), four noodles and sardines.

"The noodles and rice are no longer suitable for human consumption," he added.

The City earlier released the food packs for the affected residents especially, the drivers of public transportation as the city has been placed under MECQ to prevent the spread of coronavirus disease (Covid-19).

The Department of Social Services and Development (DSSD) repacked about 40,000 food packs and distributed it to the 61 barangays.

Malacad said the City should stop the distribution of expired food packs because it could cause illness to the recipients.

"Because of the pandemic, we asked assistance from the City Government to support our families but they provided us an expired food packs. We asked an advice from a doctor in the health center and the doctor told us not to consume the expired products," he said.

He added they already informed DSSD head Pacita Tero and they are hopeful that the City will replace the expired goods.

In response, Department of Social Services and Development (DSSD) head Pacita Tero said the rice might be stocked at the warehouse for so long thus, some were spoiled.

Tero said they will check on the concern raised and take necessary actions on the matter.

Moreover, Malacad is also appealing to the city officials to allow at least 50 percent operation of the public transportation in the city.

Malacad said most of the business establishments are still open, but there is no public transportation for the costumers.

"We are cooperating with the City Government and we are hopeful that the city will allow us to operate so we can support our families," he said.

On September 7, Mayor Evelio Leonardia issued Executive Order 69, placing Bacolod City under MECQ from September 8 to 30 pursuant to Resolution 69-A, Series of 2020 dated September 7, 2020 of the Inter-Agency Task Force for the Management of Emerging Infectious Diseases (IATF-MEID).

Under the MECQ, public transportation shall also be suspended pursuant to Paragraph 11, Section 3 of the Omnibus Guidelines on the Implementation of Community Quarantine in the Philippines with amendments as of July 16, 2020.