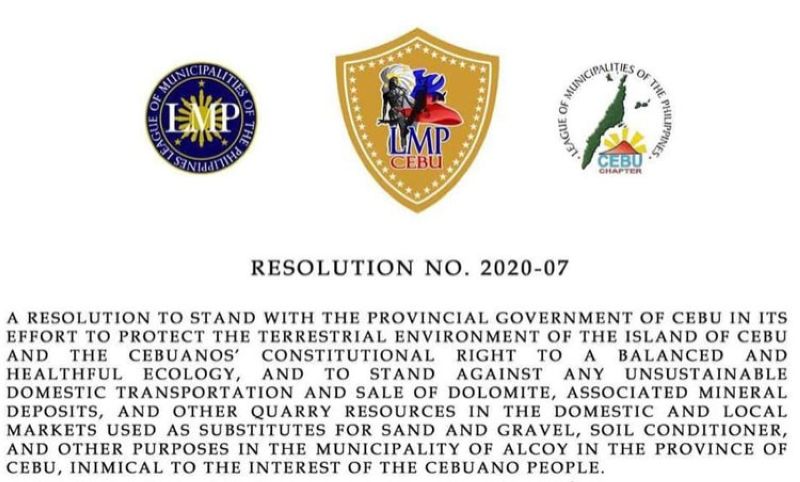 THE League of Municipalities of the Philippines (LMP) Cebu Chapter has issued a resolution supporting the Cebu Provincial Government in its effort against the domestic transport and sale of dolomite and other minerals in any market.

The LMP issued the resolution after the Mines and Geosciences Bureau (MGB) admitted that the dolomite used to make “white sand” for the development of Manila Bay is from the southeastern town of Alcoy.

The resolution was signed and supported by the mayors of Cebu’s 44 towns and three component cities.

Included in the signatories is Alcoy, Cebu Mayor Michael Angelo Sestoso whose town is where the Dolomite Mining Corp. (DMC) is operating.

The LMP, under Resolution 70, said that if left without examination of its environmental impact, the “persistent dolomite extraction in Alcoy and the consequential damage it will cause the environment of Cebu island violate the constitutionally protected right of the Cebuanos and result in irreparable and unquantifiable harm to them.”

Earlier in September, about 3,500 metric tons of dolomite mined from Alcoy was shipped to Manila to serve as filling materials for the development project of Manila Bay.

Upon review, the Cebu Provincial Government found that no public consultation was made in Alcoy and in the Province regarding the transport of the materials, contrary to what was agreed in DMC’s Mineral Production Sharing Agreement (MPSA).

Due to this, Gov. Gwendolyn Garcia issued a cease and desist order against DMC and its partner, Philippine Mining Service Corp. (ANV / JKV)