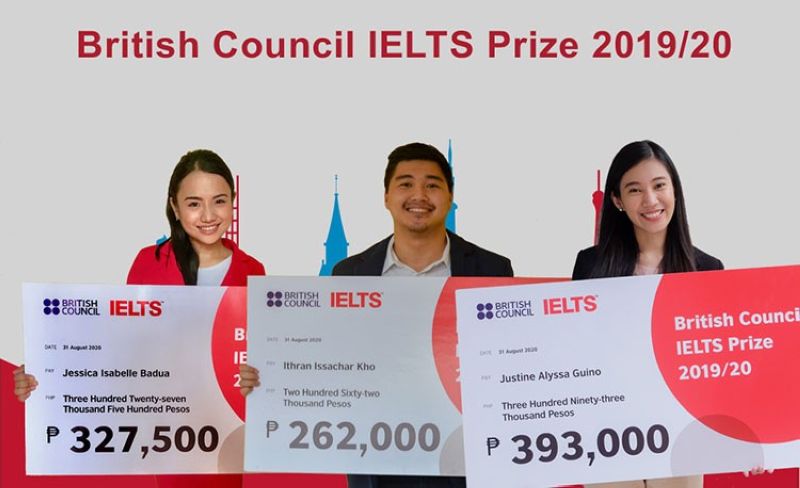 THE British Council has announced the winners of the 2020 IELTS Prize.

In its ninth year, the IELTS Prize has supported more than 270 students in East Asia to date, helping them pursue their dreams of studying abroad.

This year, 29 winners in East Asia are added to the list, including three outstanding IELTS test takers in the Philippines who have been awarded the IELTS Prize 2019/20 local prizes.

The British Council received over 1,400 applications and interviewed over 100 high flying individuals, who excelled at their IELTS test and their intentions to contribute to the society locally or abroad after study.

Three regional IELTS Prizes valued up to GBP 58,000 were awarded to top students in East Asia who will pursue higher education in their dream universities either in academic year 2020/21 or 2021/22.

There were 26 winners from countries and territories in East Asia who were also awarded local prizes, up to GBP 129,000 in total.

Commenting on her award, Regional Grand Prize winner Hyunah Kim said, "Studying in the UK is something I wanted to achieve, and I wasn't going to let the recent disruption stop that. Now I am heading to the UK, to study at the London School of Economics. Receiving the IELTS Prize will help me fulfill my education and career ambitions, and it gives me a lot more certainty, at what is a very uncertain time.

For first prize winner Guino, winning the IELTS Prize is validation that her aspirations are worth fighting for.

"Throughout the application process from the personal statement to the interviews, I felt that there was a huge focus on motivations as an individual and the potential for translating passions to impact regardless of the chosen discipline or university. I was excited to share my journey and aspirations as I felt that the British Council was supportive not just of study abroad plans but, ultimately, of dreams," she said.

The Covid-19 pandemic has disrupted study plans of millions of students to further their academic and career prospects abroad. East Asia has one of the largest number of students wishing to study in the United Kingdom, North America and Australia. IELTS, the world's most popular high-stakes English proficiency test, has been a crucial part of students' entry requirements.

Steve Adams, Director Examinations for the British Council in East Asia, said: "The IELTS Prize recognizes those high performing students that demonstrate the academic excellence and commitment to excel during international study. More importantly, they show the determination to take what they learnt during their time abroad and use it to benefit their communities when they return home. It is our privilege to help these talented individuals make their mark in the world that is rapidly changing. International study is one way they can prepare themselves to thrive in the future."