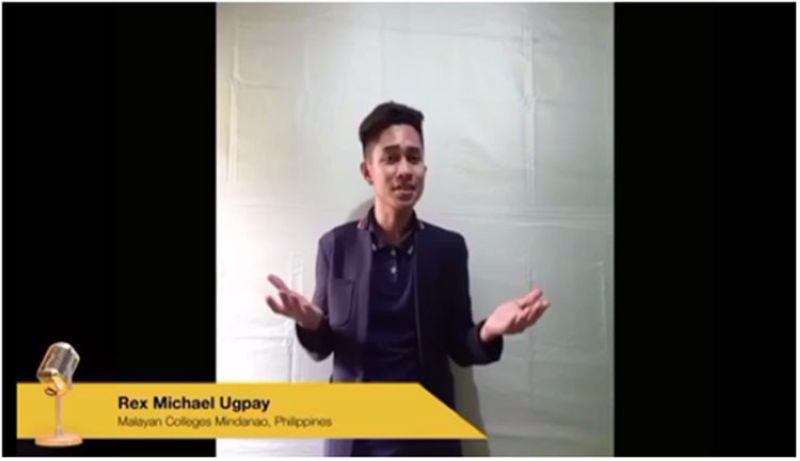 ON AUGUST 7, 2020, one of Malayan Colleges Mindanao, a Mapúa school, Chemical Engineering students -- Rex Michael Ugpay -- was recognized as the winner of the Asean Youth Speech Contest 2020 in the overseas and online category.

The winner was announced via online meet and the event was hosted by Thailand.

Among the 93 applications from 10 Asean member states, only 10 were considered finalists.

Due to travel restrictions, C Asean separated the award into two categories: one for overseas finalists and the other for Thai residents. Five of them qualified for the overseas category: two from Indonesia, one from Vietnam, and two from the Philippines: Rex Michael Ugpay from Malayan Colleges Mindanao and Nathan Felix from UP Los Baños.

Each overseas finalist was asked to submit a seven-minute clip of their speech that would be played to a panel of judges before the live presentation of the Thai residency finalists.

The speech prepared was surrounding the final theme — “Asean as One is Asean Way.”

Upon the announcement of the Top 10 finalists, Ugpay shared his preparation for the final speech presentation and how despite the disadvantages presented by the short prep-time, lack of equipment, and recording troubles, he persevered with a goal in mind.

“My motivation was my goal because I’m a very focused 'Eye-on-the-Prize' type of person. I also pressured myself to win or at least place since I’d said to myself that I don’t just represent myself, but I represent our school and the country,” he said.

Once the rest of the participants had presented, the winners were revealed and in the online and overseas category, Ugpay was announced the winner --marking him as the only Filipino participant to be placed in the Top 3.

He had received a P5,000 cash prize converted from Thai Baht, a certificate, and the chance to have his recorded speech shown to a panel of prestigious international diplomats a day after the competition at an International Diplomats Gala dinner held at the 10th CW Tower Bangkok, in Thailand.

Ugpay shared his sentiments on the overall experience being a stepping stone for qualifying in more international diplomatic youth events, and the pride he has felt as a student and an IP Youth of the Bagobo Klata tribe.

“This made me become more proud of my roots as an IP youth, I know there are a lot of issues that are faced by my community, and as a fortunate one to have more opportunities than my fellow IP youth, I want to represent them with a good mark so that when I finally have the chance, I can go back to my community and share to them what I’ve learned. These are my goals, and winning this particular event cemented my future into achieving these particular goals,” he said.

With the support of the MCM Community, Ugpay was assured to keep going after more of his goals for the future. (PR)