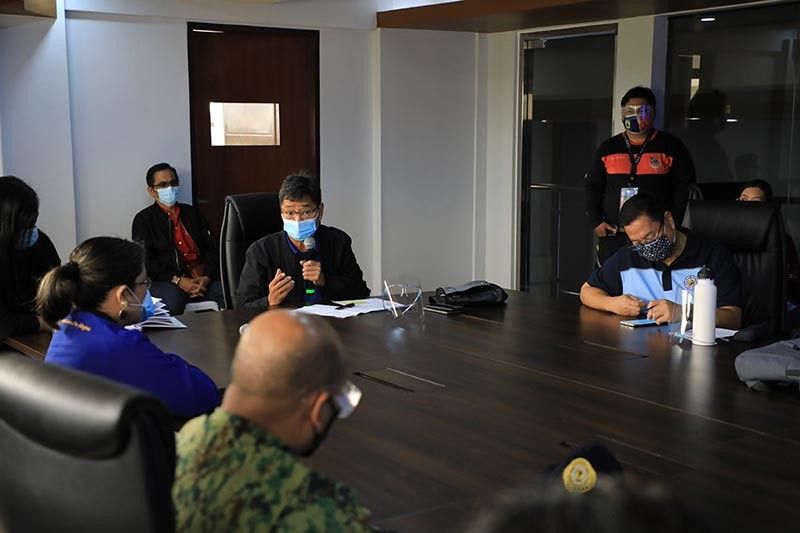 CSF COVID-19 RESPONSE. Mayor Edwin 'EdSa' Santiago shares the City Government of San Fernando’s policies and strategies on Covid-19 during the Regional Task Force’s visit to the city on September 16, 2020. (Photo by CSF-CIO)

CITY OF SAN FERNANDO -- The Regional Task Force (RTF) on Covid-19 in Central Luzon commended the City Government of San Fernando in its response to the pandemic through its policies and strategies.

This, after the group visited Mayor Edwin “EdSa” Santiago and the members of City of San Fernando, Pampanga Task Force for Covid-19 and Incident Management Team on September 16, 2020, at the Command and Control Center in San Isidro.

The visit was meant to assess the City’s response to the pandemic and to share the national and regional governments’ plans.

Maria Theresa Escolano, RTF-Central Luzon chairperson and regional director of the Office of Civil Defense, commended the City, citing that even before the national government started implementing its strategies, San Fernando’s practices were already in place.

Escolano was pertaining to the practices presented by Dr. Renely Tungol, City Health officer-in-charge and incident commander, during the activity.

Tungol, in her presentation, underscored San Fernando’s Covid-19 practices in the medical aspect, including its core components—social, economic, and governance—which have been implemented since March.

“I am really impressed and I really commend the City of San Fernando. It has a lot of best practices even before the implementation of the National Action Plan and these are really worthy of emulation. I just hope that they’ll continue them. I only have praises for this city,” Escolano said.

Tungol’s presentation focused on the efforts of the city in expanded targeted testing, surveillance, isolation and treatment, alongside other programs on minimum health standards, provision of food and non-food assistance, food security, peace and order, among others.

Tungol was referring to the “Prevent-Detect-Isolate-Treat-Reintegrate (PDITR)” strategy of the Regional Task Force, which Escolano also presented during the forum.

The PDITR strategy aims to guide the local government units in crafting their own strategies for the second phase of their responses to the pandemic. Tungol said that this will enable the City to create more strategies.

For his part, Santiago said that the City has always been managing priorities for effective responses.