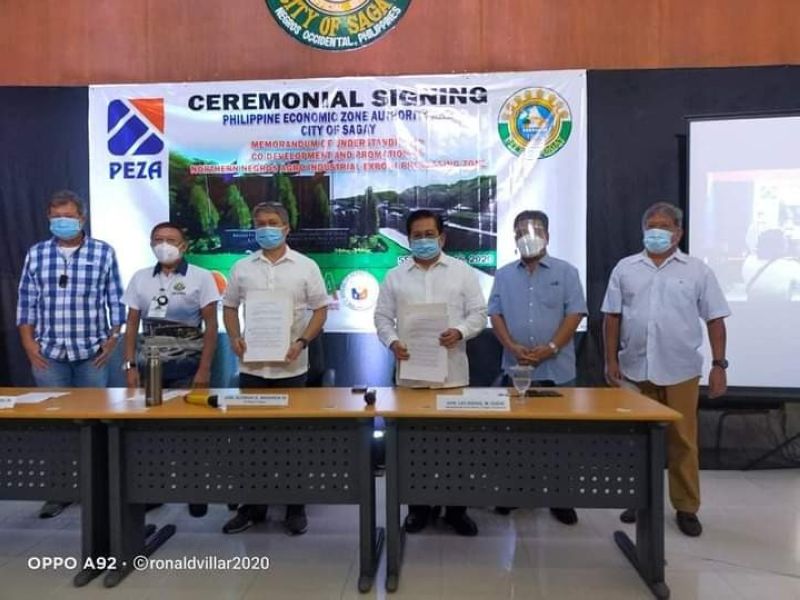 NEGROS. Sagay City Mayor Alfredo Marañon III, along with top officials of the Second District during the virtual signing of Memorandum of Agreement with the Philippine Economic Zone Authority for the establishment of the expanded Northern Negros Agro-Industrial Export Processing Zone on Wednesday. (Contributed photo)

THE Memorandum of Understanding (MOU) between the City Government of Sagay and Philippine Economic Zone Authority (Peza) is the first-of-its-kind in the country between the latter and a local government.

This was underscored by Peza Director General Charito Plaza and Mayor Alfredo Marañon III during the virtual signing via Zoom of the MOU at the Sagay City Sangguniang Panlungsod Session Hall on Wednesday, September 16.

They showed support to the establishment of the expanded Northern Negros Agro-Industrial Export Processing Zone (NNAIEPZ) that will be co-developed by Peza and Sagay at the 1,600,000-square meter or 16-hectare property owned by the City Government in Barangay Paraiso.

The new area, which awaits another Presidential Proclamation, is on top of the 200,000-square-meter or 20-hectare adjoining property declared as ecozone in 2008 when then Governor Alfredo Maranon, Jr. was the mayor of Sagay.

The former governor secured a Presidential Proclamation covering the original export processing zone about 12 years ago.

Plaza, in her speech, pointed out that the partnership between Peza and Sagay is a result of institutions that are "thinking global but acting local" in a bid to pursue countryside growth.

"Let me thank the City Government of Sagay for collaborating with Peza. Thank you for the opportunity to partner with us," Plaza told local officials.

Marañon, for his part, recalled that paper works, documentation and completion of requirements started in February last year.

"Let me thank Director General Plaza for answering our goal to develop the export processing zone. Today, we are gathered here to sign the MOU. This is the first between Peza and a local government unit," Marañon noted.

He said that while everything is in a slowdown [due to the Covid-19 pandemic], "we saw things differently -- that in a crisis situation there's an opportunity."

"This is to prepare ourselves when the economy re-opens as we consequently answer the call of the President to bring development to the countryside through the Balik Probinsya Bagong Pag-asa Program," the mayor added.

"Thank you for making this partnership a reality," Marañon told the Peza top official.

Cueva, the prime mover behind the Casama Development Alliance that groups together the local government units (LGUs) in Second District including Cadiz City, Sagay City and Manapla town and pursue a common road map for development, commended the teamwork between Plaza and Marañon.

"Pushing through with this project forward in spite of the pandemic is a clear indication that we want this initiative to materialize. This (NNAIEPZ) will be a big help not only for the people of Sagay and the Second District but will also be beneficial for the whole [Negros] island. This will also eventually draw our kababayans back to the provinces to decongest Metro Manila," Cueva said.

He wished both the Peza and LGU success in their partnership to co-develop the expanded NNAIEPZ that will be worth emulating by other LGUs.

"This partnership is a game-changer in making this part of Negros Occidental an example on how government can work together for the betterment of the province in general and Sagay City in particular," Cueva added.

Manapla Mayor Escalante said the agreement between the Peza and Sagay sent a very encouraging signal as his LGU, which is positioning itself as a medical tourism destination, is also finalizing paper works for its own economic zone on a 20-hectare area.

"We are looking forward that after Sagay, the ecozone will go all the way to Manapla as we prepare for the reopening of the economy," Escalante said.

Cadiz City, Sagay's next door neighbor, is similarly upbeat as its mayor disclosed that the local government is also getting a Peza accreditation for its seaside economic zone with an initial area of 27 hectares.

Let the fun begin, despite the pandemic, at the Casama area, Escalante said.

The Cadiz top executive said the advantage of the Second District is the availability of land, natural resources, renewable energy source, existing port facilities and the estimated combined workforce of 220,000 people from the whole district.

The former, meanwhile, said the Peza-Sagay partnership is a breakthrough development.

Being a pioneering endeavor, a first-of-its-kind, will set the district apart from the others, Escalante said, adding that "so that after the pandemic, everybody will be ready for the race." (PR)