EXPLAINER: Governor, congressman, who lost two brothers to Covid, question hospital practices. And billing, which may be tied to Philhealth irregularities. 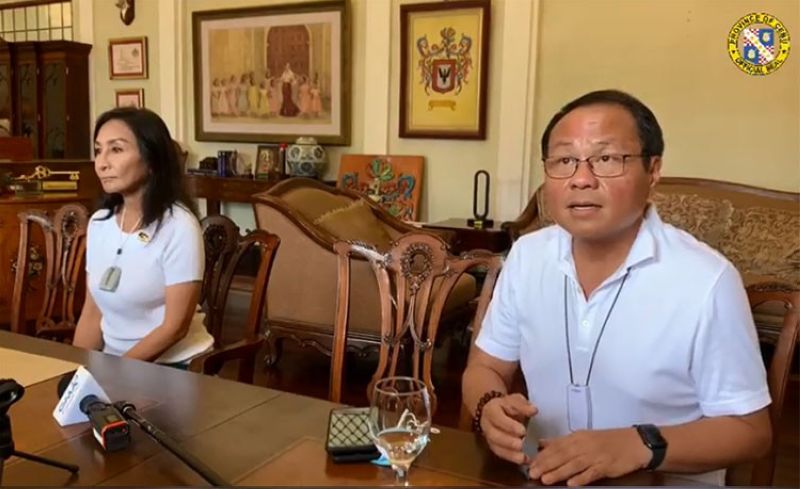 CEBU. Governor Gwen Garcia and her brother, Representative Pablo John Garcia, talk to the media on September 17, 2020 about the deaths of their brothers, Nelson and Marlon. (Screenshot from Sugbo News video)

DEATHS IN THE FAMILY. Two high elective officials of Cebu -- Governor Gwen Garcia and her brother, Representative Pablo John "PJ" Garcia -- did what most relatives of hospital patients would do only privately. They raised complaints and questions about two recent deaths in the family at a press conference Thursday, September 7.

The Garcia siblings wondered aloud why their two brothers died despite the high cost of treatment, assailing the post-Covid-19 treatment, which could have caused the deterioration of their condition. And they raised doubts over possible irregularities in the billing, which might be linked to the fraud over Philhealth's epidemic funds that Congress investigated.

Former Dumanjug mayor Nelson Garcia and Barili Mayor Marlon Garcia died a few days apart: Nelson, 61, on September 1 and Marlon, 58, on September 6. Both were tested positive for coronavirus in August but were supposedly rid of it before they died of other ailments while in the hospital.

LESSONS FROM TRAGEDY. While admitting their deep personal loss and grievance over the family tragedy, Governor Gwen and Congressman Pablo John said they want would-be coronavirus victims to learn some lessons from their experience:

[1] About getting treatment: Get it early, said Gwen. Check out the record of hospitals on managing and treating Covid cases, said PJ. Decide well on whether hospitalization is preferable to home treatment, especially if the case is still moderate, both the governor and the congressman advised.

They were "stunned" that Mayors Nelson and Marlon who were treated at the hospital died while a third brother, Representative PJ, who also contracted Covid but was treated at home, survived and was doing well.

[2] Not helping spread the coronavirus to others must also be a concern of the person infected. Gwen said that once a person gets the symptoms and suspects or is confirmed to be infected, isolation or quarantine procedure must be taken. Quick testing means early treatment and impeded transmission.

ARE THEY SUING? The Garcias were asked at least twice whether they would sue the hospital and the doctors -- not named during the press-con -- over their two brothers' death.

They didn't say they are planning to press charges. PJ said they would still ask experts, probably government, whether lapses were committed and procedures violated. They are not doctors, the governor and the congressman said. Their inquiry starts with seeking the explanation for the "doubtful circumstances" in the death of Nelson and Marlon.

THE PUZZLERS. The major source of puzzlement appears to be the "post Covid medical intervention" on the two brothers.

They were pronounced to have recovered from the virus and yet, the Garcias said: (a) Nelson and Marlon were given the same Covid treatment, including "those very expensive" drugs; (b) the doctors refused to discharge them even though one, Marlon, offered to sign a waiver; and (c) the patients were still confined in the ICU room, which the Garcias allege, is the most virus-infected part of the hospital.

Stuck with the issue of post-Covid treatment is how the cause of death is determined. What must appear in the death certificate as cause of death? Covid? Or the disease that sets in after Covid is supposed to have been licked?

PHILHEALTH MESS. The death certificate is the basis for determining the amount the hospital will charge and collect from the state insurance company.

The governor and the congressman raised:

[1] The probability of hospitals classifying non-Covid deaths to Covid to make collection easier, particularly when the patient has no or limited capacity to pay, since Philhealth advanced the funds. Hospitals might be tempted to change moderate cases to severe ones and apply medicines no longer needed and thus enable the hospital to charge more. That's a prospect that most people who have experiences with hospitals speculate about but don't gripe about in public.

[2] The erratic charging for certain Covid medicines. The hospital -- from the Garcias' experience and anecdotes from others -- charge different prices for the same drug, ranging from P10,000-P20,000 to P80,000 per dose, at times allegedly lowered when the patient's family complained. The same drug, Gwen said, was purchased by Capitol for only P6,350 each.

The Garcias said the family was billed by the hospital about P3 million for Nelson and P5.2 million for Marlon, mostly on pharmaceuticals and excluding doctors' fees.

NOT ALWAYS RIGHT OR PURE. Whether the case will reach the courts, the incident sharply illustrates the near-total helplessness of patients and their families when they question decisions made in a hospital. A non-doctor in a hospital room is similarly situated as, though more scared than, a non-lawyer in a courtroom, where the consequence cannot be death.

The sick or the injured surrender their fate to doctors and hospital owners whose actions may not always be seen by the patient or his family, the persons mired in tragedy, as absolutely right or purely motivated by the mission to heal and save lives.