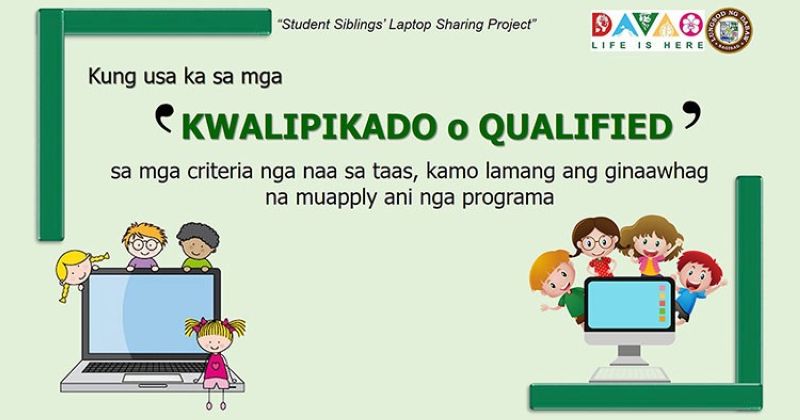 THE City Government of Davao launched a laptop-sharing project that aims to give 300 laptops to students enrolled in junior and senior public high schools for their online classes.

The project, called the "Student Siblings' Laptop Sharing Project," is initiated by the City Government and sponsored by the Consulate General of the People's Republic of China in Davao City.

Presidential Commission for the Urban Poor (PCUP) supervising commissioner for Mindanao Norman Baloro, spokesperson for the special project, said qualified beneficiaries should be a junior or senior high school pupil from an indigent family, indigent solo parent, or living with indigent guardians; must have online and offline classes; lives in a dwelling with electricity; and, must have two or more siblings who are enrolled in schools to share the laptop with.

Baloro said priority will be given to those residing in Toril Proper, Buhangin Proper, Bunawan Proper, and barangays under Poblacion and Agdao Districts since these are urban poor areas with stable electricity and internet connections.

Baloro said the 300 qualified students to receive the laptops will be asked to comply with the requirements that will be posted on the Facebook page of Eskwela Davao.

"We will get and generate the names and we will find those who need it the most, especially those who are less fortunate. According to Neda (National Economic Development Authority), a family can be considered poor when a family of six persons only has P12,577 monthly income," he said.

Davao City Mayor Sara Duterte-Carpio said in a radio interview on Friday, September 18, that the project aims to help indigent students especially that the opening of classes will start on October 5.

As of now, the laptops are still not available for distribution, and the City Government is still identifying the qualified beneficiaries of the project.

The mayor reminded that students that are already enrolled in other scholarship programs and assistance such as the Eskwela Davao, Step scholarship, Ched-LGU Tulong Dunong Program are no longer qualified for the Laptop Sharing Project.

"We are trying to spread around assistance available para sa tanan (to all). Katong mga nakadawat na sa laing assistance, atoa napung ihatag ang opportunities sa mga zero pa ang nadawat nga assistance (We would like to give others the opportunity, especially those who have not yet been able to avail in any of our assistance)," Duterte-Carpio said. (With reports from CIO)