Housing for landslide survivors in Naga fails to get off ground 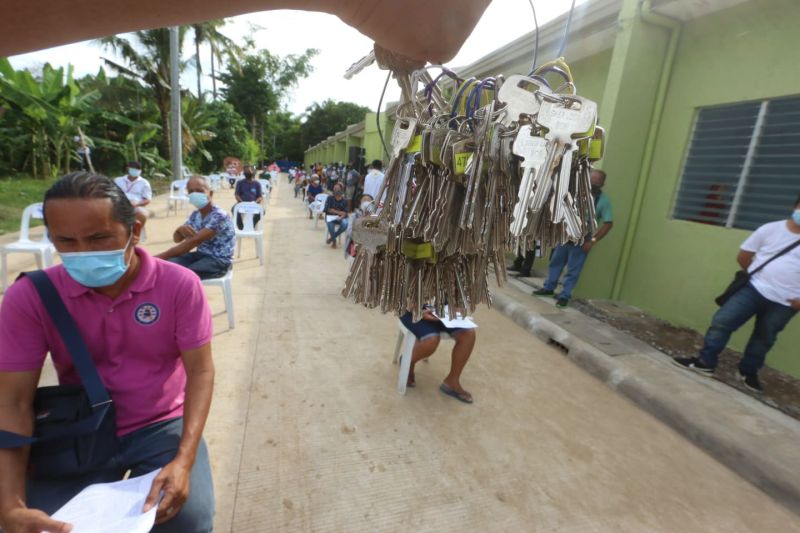 WAITING FOR NEW OWNERS. Keys to 46 houses the City Government of Naga built in Sitio Tapon, Barangay Tina-an for survivors of the 2018 landslide were turned over to their new owners during a ceremony on Friday, Sept. 18, 2020. (ALEX BADAYOS)

CITING delays encountered in site development, the National Housing Authority (NHA) 7 has yet to start construction of the housing project for 192 families who were forced to leave Sitio Sindulan in Barangay Tina-an after the 2018 landslide in the City of Naga.

Hermes Jude Juntilo, NHA 7 officer-in-charge, told SunStar Cebu that the P89.8-million contract for the construction of the housing units was awarded to the contractor last November yet. However, work could not start because of the slow progress in the implementation of drainage and waterline works, among others.

Francis Urdanieza, Department of Human Settlement and Urban Development (DHSUD) 7 officer-in-charge, said the 26 percent progress in site development on a portion of the Balili property in Barangay Inoburan is around 12 percent short to what could have been accomplished already at this time.

The Housing and Land Use Regulatory Board and the Housing and Urban Development Coordinating Council were officially merged to become DHSUD last January.

DHSUD 7 is the department responsible for providing a developer to undertake the site development component of the Naga Housing Project. NHA 7 is an attached agency of the DHSUD 7 that is responsible for the construction of the housing units.

He also clarified that while the housing construction is funded by the government, site development is shouldered by the private developer as part of its socialized housing compliance, which the law mandates.

For the Naga Housing Project, the City of Naga entered into a memorandum of agreement with the NHA 7, DHSUD 7 and a private developer.

He said the DHSUD 7 has no direct control and supervision over the contractor for the site development as the agreement to this component is between the developer and the contractor.

“As far as site development of the Naga project is concerned, we follow up the developer because we do not have a memo with the contractor. We are directly dealing with the developer,” Urdanieza said in a mix of Cebuano and English.

A private developer can undertake the management of the site development, but in most cases, such as in the Naga Housing Project, the private developer has contracted another contractor to develop so it can meet the socialized housing compliance, he said.

He said the contractor is supposed to complete the site development within 200 calendar days or by October, but they asked for an extension until December.

It was also only two weeks ago when concerned government agencies were able to convene again for the project, he said.

Urdanieza said they are scheduled to conduct a site inspection next week.

As of now, the contractor has targeted to ready the first three blocks by the end of September so the NHA 7 can start with the housing construction by the first week of October.

Juntilo said if they can start in October, they will target to finish it within seven months, granting there are no other obstructions, such as re-imposition of enhanced community quarantine.

He said the houses will be made of concrete and light blocks will be used for the walls instead of hollow blocks. Each house will have a septic tank, plumbing and electricity.

City of Naga Mayor Kristine Vanessa Chiong, for her part, said she is positive the project will push through since it has already been bid out and the budget is there.

“The project is just delayed,” she said in Cebuano.

On Friday, Sept. 18, 2020, 46 families whose houses were destroyed by the catastrophe received the keys to their new homes that were pledged by the City Government, two days before the second anniversary of the incident.

There were originally 78 beneficiaries, Chiong said, but the others opted to avail themselves of the P100,000 building assistance the City also offered.

Aside from that, the City also gave all affected families P50,000 each.