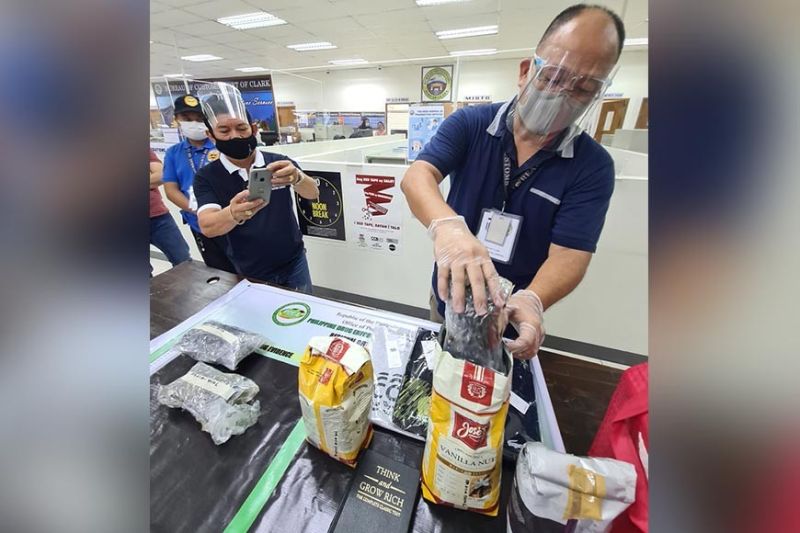 SOME P1.1 million worth of high-grade and processed marijuana leaves commonly known as "kush" were intercepted by personnel of the Bureau of Customs Port of Clark and Philippine Drug Enforcement Agency at the Clark International Airport recently.

Port of Clark District Collector lawyer Ruby Alameda said the parcel was declared as clothing and coffee. It was consigned to a certain "Rowena," a resident of Sitio Urguico, Barangay Matatalahib, Tarlac City.

Alameda said examiners on the field found the parcel suspicious, which prompted them to conduct profiling of the shipment contents.

"It is very surprising that you can smell the aroma of coffee when it is vacuum-sealed. When we checked the parcel, we found a pair of men's clothing three packs of coffee beans and used bag. The Kush was stuffed in three coffee beans packs," Alameda told reporters during the turn over of prohibited drugs to PDEA representatives.

PDEA-Pampanga Provincial Director Jioseph Samson said the seized kush, approximately weighing 990 grams valued at P1.1 million under the Dangerous Drugs Board estimate, was shipped from the US.

Controlled delivery was launched against the consignee but failed to find the address and person.

Five suspects were arrested during the operation.

PDEA agents also placed under their custody the vehicles used to transport the illegal items, including two motorcycles and a Nissan Urvan van.

The suspects were brought to the PDEA provincial office for further investigation as violation of the Comprehensive Dangerous Drugs Act is being readied against them.