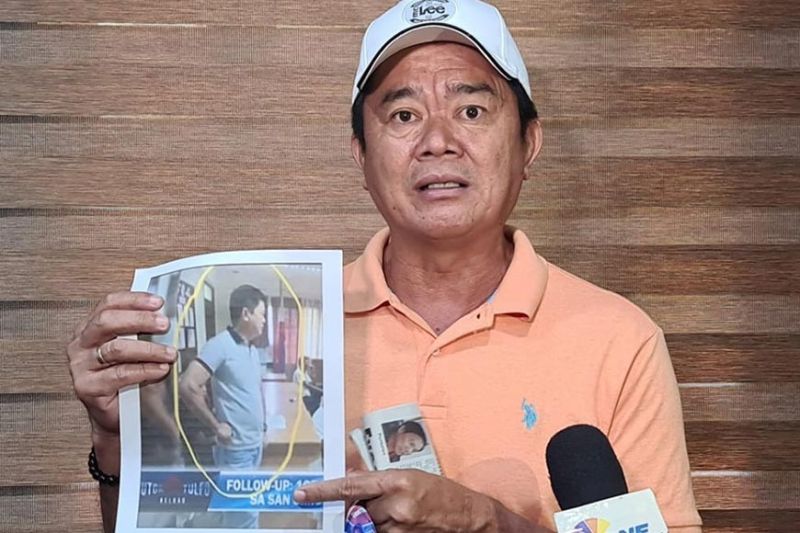 'I FEAR FOR MY SAFETY.' Former San Simon Councilor Mel Tayag holds a picture identifying him as Erwin Chua, owner of Real Steel Corporation. Tayag in a pressconference on Saturday said that he fears for his safety after he was bashed on social media in relation to the issue between the management of the said smelting plant and former workers. (Photo by Chris Navarro)

CLARK FREEPORT -- A former councilor of San Simon town in Pampanga has said that he now fears for his life after his photo was posted on social media.

Melchor Santillan Tayag, who is also a former environment officer of the town, said the photo posted on the Facebook page of broadcaster Erwin Tulfo identified him as Erwin Chua, the owner of Real Steel Corporation located in said town, who was earlier accused of maltreatment and illegal detention of his employees.

During a press conference inside this freeport on Saturday, the former town official lamented that he is now being bashed by netizens because of the "wrong photo."

"I have been receiving threats and bad words from netizens because of the irresponsible reporting by Mr. Tulfo," Tayag said in Pampango.

The former municipal councilor said that even his family members suffer from sleepless nights because of the issue.

Tayag said he is planning to file cyber libel charges against the broadcaster and other individuals who allegedly maligned and put him in a bad light.

The former local official said the photo posted by Tulfo was taken almost three years ago during his term as an environment officer in the town.

He complained that the Facebook post made it appear that he is the Chinese owner of the steel manufacturing plant.

Officials, who accompanied Tayag during the press conference, denied the accusations against Chua saying all of their workers numbering to more than 500 are free to go out of the plant.

They added no criminal charges were filed against the steel firm's owner in connection with false accusations.