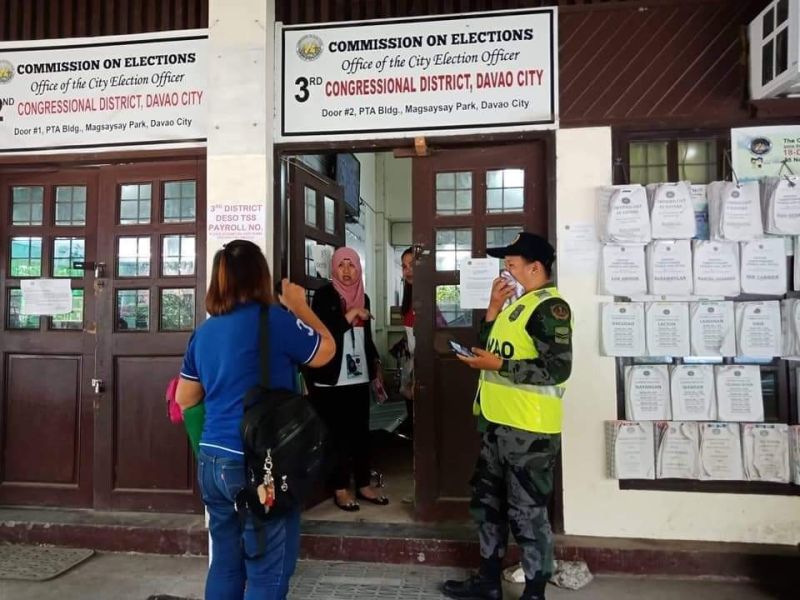 OFFICES of the Commission on Elections (Comelec) in Davao City are temporarily closed to the public for disinfection after one of its employees had a closed contact with a Covid-19 patient.

Comelec-Davao Assistant Regional Director Gay Enumerables said in a virtual presser that all of its Comelec district offices located inside the Magsaysay Park and its regional office had been temporarily closed beginning Friday, September 18, and will last for five days.

All queries and other concerns are advised to be coursed through their official social media accounts.

Enumerables said one of its pregnant election assistant officials had a prenatal checkup in the previous weeks wherein the clinic she went to also had a patient who is a confirmed Covid-19 patient.

She said the election assistant was still able to report for duty at the district office. She later found out that she was included in the contact tracing list.

The office is set to resume operation on Thursday, September 24, the Comelec official said.

Enumerables said they decided to include the regional office in their disinfection after one of its employees also went to the district office.

"Pero so far, wala pa'y nag-positive. Ug maayo pa ang panglawas sa atong mga empleyado (So far, none of our employees have tested positive. All of them are in good condition)," she said during the One Davao on Covid-19 virtual presser.

Comelec has since resumed operation on June 15 in the entire region following the shift to general community quarantine (GCQ), but it only issued voter’s certificates to registered voters. It resumed its voter's registration for the 2022 national elections in September.

She said these measures include the installation of glass windows or plastic sheet barriers and hand sanitation; daily disinfection of all office furniture and equipment; and posting of clear and visible signs about wearing face masks/shields, regular hand washing, physical distancing and other preventive measures.

She said a “no face mask/shield, no transaction policy” and strict social distancing rules will also be implemented inside the offices.