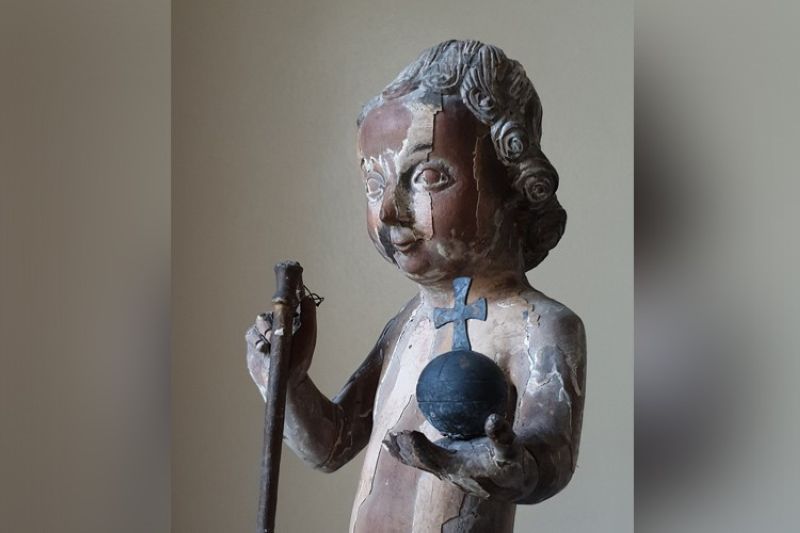 MANILA. The centuries-old Santo Niño image, which was reportedly stolen in the Parish of the Santo Niño in Malitbog, Southern Leyte some 32 years ago. (Photo from Francis Ong Facebook)

THE Diocese of Maasin has expressed elation over the return of a centuries-old Santo Niño image that was reportedly stolen in the Parish of the Santo Niño in Malitbog, Southern Leyte some 32 years ago.

“Our joy of knowing that the centuries-old image has been found might be compared with the joy of Mary and Joseph when they found the lost child Jesus in the temple,” said Monsignor Oscar Cadayona of the Diocese of Maasin.

“Our Bishop has already instructed our chancellor to communicate officially with the individual who has the old image and who was the first one to contact us,” Monsignor Cadayona told Sunstar Philippines.

Father Mark Vincent Salang, chancellor and chairman of the Diocesan Commission on Worship, said the return of the Santo Niño is an answered prayer.

CBCP News reported that the Santo Niño image was first enshrined inside the parish in Malitbog town after its church construction in 1857.

Malitbog, which is some 60 kilometers away from the Diocesan capital in Maasin City, became a parish in 1850.

Salang said the image was believed to be crafted by local artisans in the 1720s “to be a replica of Cebu’s Santo Niño,” according to the report.

However, the image, along with other church properties, was stolen from the parish in 1988.

“It was an unfortunate event that one of the treasured images of the Holy Child reverently venerated in the Diocese of Maasin got lost more than three decades ago. It is with great joy that you have informed us that you have found this dearly beloved image of the Señor Santo Niño and have secured it, to be returned to his home—our Diocese,” said Salang in his letter to Francis Ong, an antique collector in Manila who got hold of the image.

Ong earlier said the lost venerated image of Malitbog has “uncanny semblance” to the one in his collection based on articles and photos he found.

According to Salang, the return of the Santo Niño image is “truly providential” as the Catholic church is set to celebrate the 500th anniversary of the First Easter Mass that happened in Limasawa Island, part of the territory of the diocese, on March 31, 2021.

“We will be forever grateful to you for being instrumental in the return of the sacred image of the Infant Jesus. We acknowledge your goodwill and your generosity,” added Salang in his letter dated September 18, 2020.

Ong said he took possession of the Santo Niño image in November 2019 after its previous owner had died.

“There was no remorse nor regret but pure joy and happiness for not everyone is made a conduit for the recovery of such spiritual and cultural treasures,” Ong told CBCP News.

In his Facebook post, Ong also expressed his gratitude to some friends, namely Jayson Maceo, Dr. Rafael Lopez, Glenn Leyson, and Sergio Marquina, for informing him and helping him in identifying the lost image.

According to Ong, the image will undergo minor restoration before it will be brought back to Malitbog in time for its annual town fiesta celebration on January 15, 2021.

“What a privilege to be able to have in our home for a few months, such a revered and miraculous Niño,” Ong said. (SunStar Philippines)