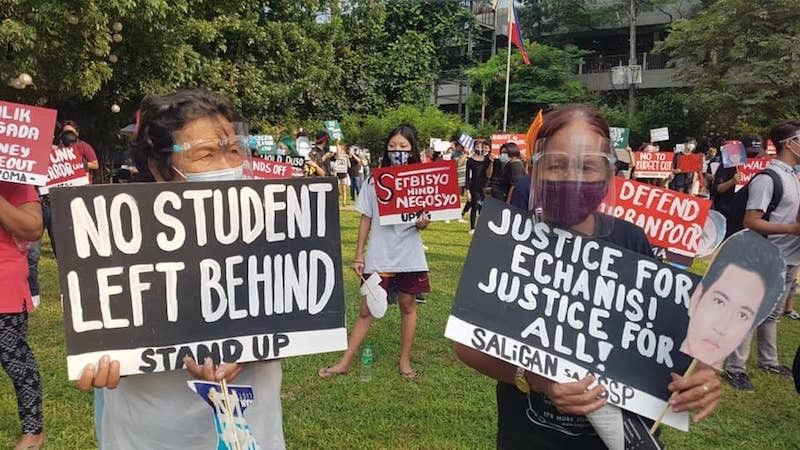 HUMAN rights activists on Monday, September 21, 2020, commemorated the declaration of martial law in the Philippines 48 years ago with a series of protests.

The Anakbayan-Europa gathered in front of the Philippine embassy in France and proceeded to the Eiffel Tower to remember the victims of martial law.

The group also protested against the extrajudicial killings in the Philippines under the administration of President Rodrigo Duterte.

They cited two other “parallels” between the Marcos and Duterte administrations, namely, the shutdown of television network ABS-CBN and the “use of force to quell dissent and scare activists, human rights defenders, the clergy and others”.

"Duterte is clearly following in the footsteps of Marcos,” the group said in a statement.

The National Federation of Small Fisherfolk Organization in the Philippines (Pamalakaya) also launched a protest along with other peasant and fisher groups at the People Power Monument along Edsa in Quezon City.

In Cebu, the Visayas chapter of the Bagong Alyansang Makabayan held a protest in front of the embattled ABS-CBN regional station in Mandaue City.

Under Duterte’s term, ABS-CBN's regional stations were forced to sign off after the House of Representatives voted against the network's franchise renewal on July 10, 2020.

Among those who joined the rally was Bayan Muna chairperson Neri Colmenares.

Meanwhile, the National Union of Journalists of the Philippines (NUJP) launched Monday its Masked Media Movement, a fund-raising project for the Defense Fund for Filipino Journalists.

"On this day 48 years ago, Ferdinand Marcos, then president of the Republic, subverted the democracy he was sworn to defend and declared martial law on false pretenses, letting loose a 14-year reign of terror that saw thousands killed," the group said.

“Today, we launch the ‘Masked Media’ campaign, not just to remember that dark incident in our history but also to send out the message that today, we face the same renewed efforts by another government, one led by an unabashed fan of Marcos, to suppress freedom of the press and pervert the truth," NUJP added. (Jove Moya/SunStar Philippines)