Army renews call for reconciliation during commemoration of Escalante massacre 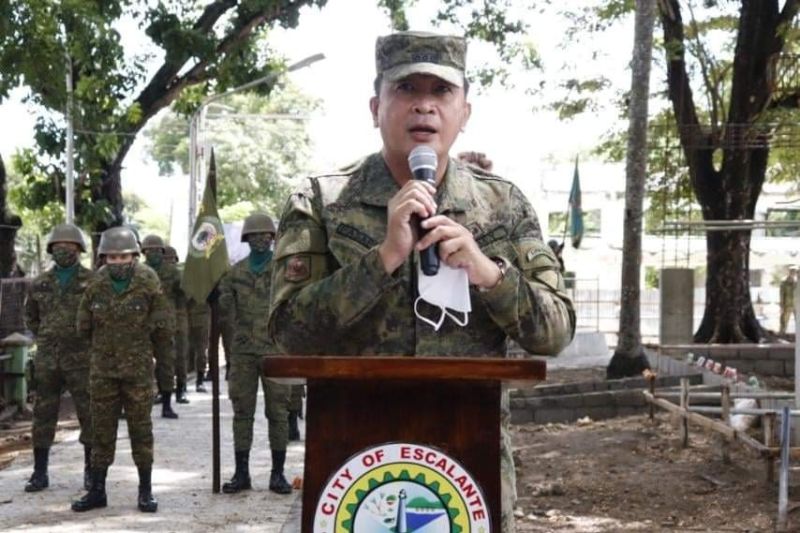 COLONEL Inocencio Pasaporte, 303rd Brigade commander of the Philippine Army, renewed call for reconciliation during the commemoration of the 35th Escalante Massacre at the Escalante City Public Plaza on September 20.

"The Escalante City massacre has been part of the history not only of Escalante City but the whole Philippines as well. It is an unfortunate incident that was taken advantage by the Left for the longest time. They use it to foment hatred and incite the people of Escalante for their selfish ideological motives. The call for reconciliation started last year during the Peace Summit and this year's commemoration is another significant step to continue and unify the people of Escalante for reconciliation and healing. Let this incident serve as a painful reminder for us not to commit the same mistake. Let us continue the reconciliation as we move forward to a peaceful and progressive Escalante City," Pasaporte said.

The commemoration was led by the Escalante City Government and supported by the 303rd Brigade and the Negros Occidental Provincial Police Office.

This year's Escalante Massacre commemoration is themed "35th ESCAM Commemoration: Towards a New Decade of Healing and Moving Forward."

Escalante City Mayor Melecio Yap, in his message, urged the Philippine National Police (PNP) to double their efforts to solve some unsolved crimes in Escalante City.

Janet Pantunyaw, on behalf of the Escalante massacre survivors, also shared her personal experiences how she survived the incident and how worst were their lives when they were still with the rebels.

She also thanked the local government of Escalante and the Armed Forces of the Philippines (AFP) for giving them another chance to be one with the government.

She acknowledged the importance given to them and the livelihood through the Center for Collaborative Solutions.

"Now, we see a bright peaceful future for us," she added.

Meanwhile, Ka Juanito Magbanua, spokesperson of the Apolinario Gatmaitan Command-New People's Army-Negros Island on the 48th commemoration of the declaration of Marcos' Martial Law, called on the Filipino masses to resist the new Martial Law of the Duterte regime.

"The number one terrorist in this country is Duterte and his imperialist masters. The Duterte regime has overshadowed Marcos' legacy of gross human rights violation and plunder," Magbanua said in a statement Monday, September 21.